SOPA and PIPA – the bills that shook the world

We have all been eye witnesses of ongoing protest about two bills which weresupposed to be voted on January 24th, 2012 by the Senate of USA; Not many of the people who have signed the petition know the content of the bill which has been public on several web-page through weeks; However what everyone can tell is the threat what SOPA and PIPA are bringing with itself in case they pass and become law. 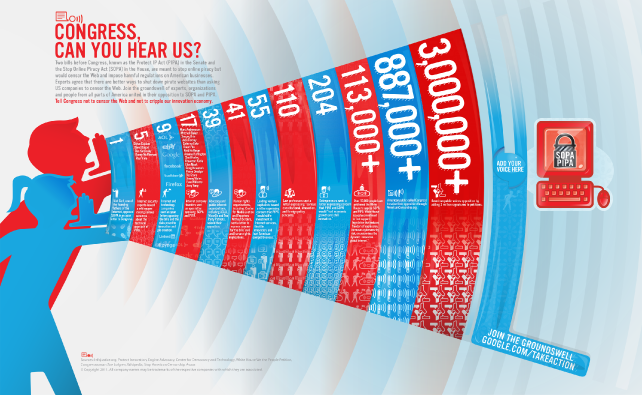 Millions of Internet users and entrepreneurs already opposed those bills and stated that it would censor the Web and impose harmful regulations on American business. 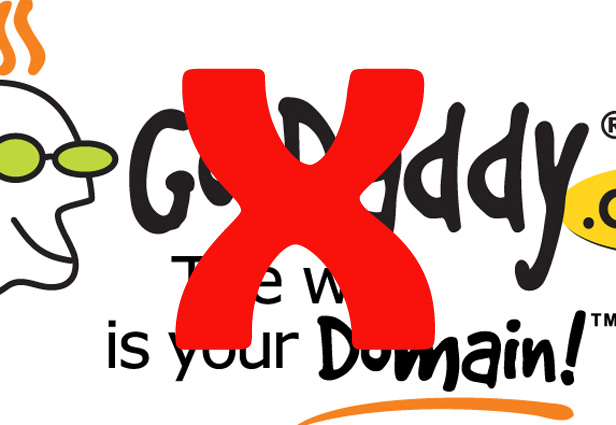 Several of those Congressmen who openly supported the bills to be passed seems have changed their opinion after the widespread Internet blackout Wednesday, in which sites such as Wikipedia and Reddit went dark to protest upcoming disaster. 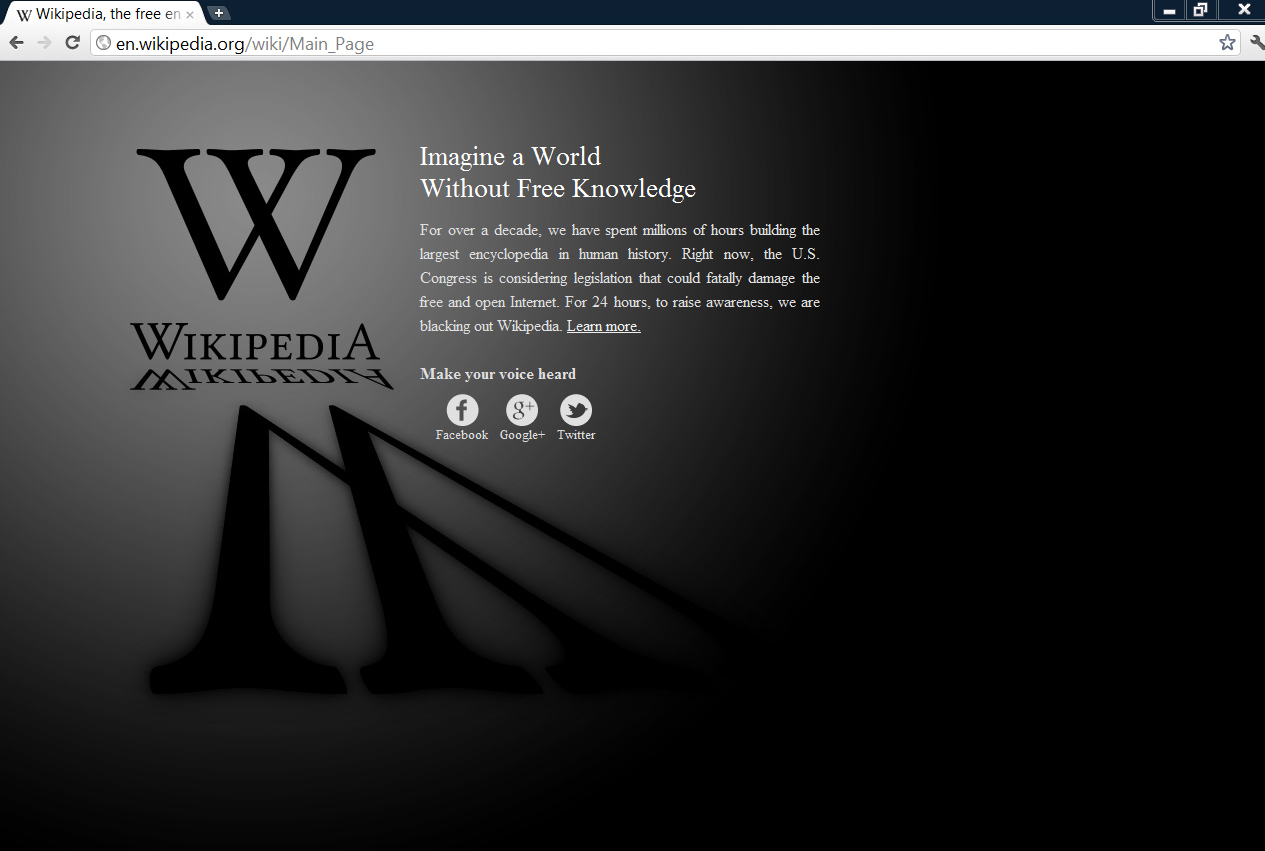 Marco Rubio was the one who pulled his name out of the bill and communicated via Facebook post, where he explained his decision accordingly: “As a senator from Florida, a state with a large presence of artists, creators and businesses connected to the creation of intellectual property, I have a strong interest in stopping online piracy that costs Florida jobs… However, we must do this while simultaneously promoting an open, dynamic Internet environment that is ripe for innovation and promotes new technologies.” Nevada Sen. Harry Reid,Texas and Nebraska Senators, John Conrnyn and Lee Terry were the ones who shared the formers idea about having more acute problems to solve nowadays than this.

What is actually written in those bills and what rules they impose on internet users or web-page owners will be discussed now. It was often mentioned that The PROTECT IP Act (PIPA) is a re-write of the Combating Online Infringement and Counterfeits Act (COICA) which failed to pass in 2010. Its goal is to give the US government and copyright holders additional tools to restrict and control access to rogue sites which intend to infringe others rights to intellectual property, especially registered outside of US. 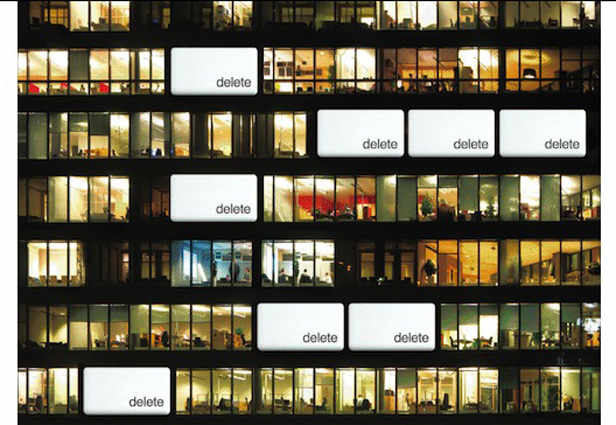 The Stop Online Piracy Act (SOPA) aims to expand the ability of U.S. law enforcement to fight online trafficking in copyrighted intellectual property and counterfeit goods. Provisions of the aforementioned bill include giving government the right to unilaterally censor foreign websites; to give copyright holders the right to issue economic takedowns and bring lawsuits against website owners and operators, if those websites have features that make it possible to post infringing content. Furthermore, it can make felony offense to post a copyrighted song or video. The law would expand existing criminal laws to include streaming of copyright material, imposing a maximum penalty of five years in prison. 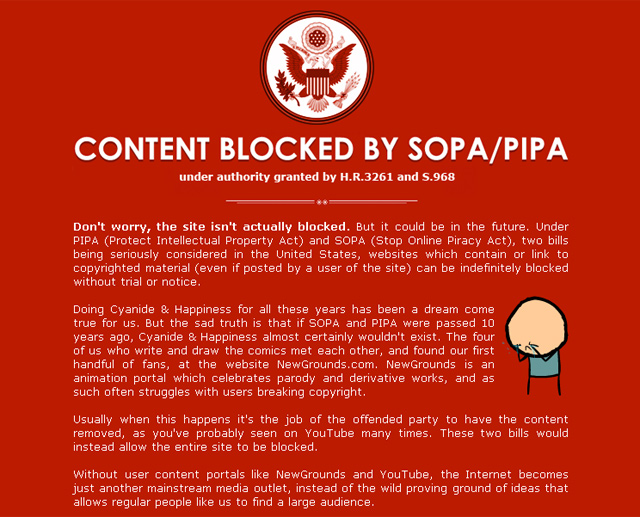 Proponents of the bill say it protects the intellectual property market and corresponding industry, jobs and revenue, and is necessary to bolster enforcement of copyright laws, especially against foreign websites. But the voice of the opposing party is heard all over the world by posting on their individual blogs, FB pages, other social network sources to make the legislators believe this would cause a world of no free speech, no internet access and no innovations.
[ADS2]
“This bill turns us all into criminals. If it passes, then you either stop using the Internet, or you simply hope that you never end up in the crosshairs, because if you’re targeted, you will be destroyed by this bill. You don’t have to be a big, mean, nasty criminal — common Internet usage is effectively criminalized under this law. This bill will kill American innovation and development of the Internet, as it will become too risky to do anything of value. It is toxic and dangerous, and should not, under any circumstances, be supported.” – That is the overall content you can read on any of those bloggers wall being deeply concerned about their future and connection with Internet.

Mark Zuckerberg the founder and CEO of Facebook spread his position via his FB page, where he said:
“The internet is the most powerful tool we have for creating a more open and connected world. We can’t let poorly thought out laws get in the way of the internet’s development. Facebook opposes SOPA and PIPA, and we will continue to oppose any laws that will hurt the internet.
[ADS2]
The world today needs political leaders who are pro-internet. We have been working with many of these folks for months on better alternatives to these current proposals. I encourage you to learn more about these issues and tell your congressmen that you want them to be pro-internet.”

It is obvious that those bills shook the whole world. People triedto defend their rights and to make it clear and visible why PIPA and SOPA could be harmful for everyone, counting them who didn’t even realize it by now. As a result on 18th of January, voice of American nation has been heard and the votes on SOPA and PIPA have been delayed. Though the question how long this condition will last, still remains a question that threatens the hearts of those concerned.