The history reveals the two different stories of goddess Artemis, which from time to time mistakenly is considered to be same worshiping goddess. However, The Ephesus Goddess Artemis, sometimes called Diana was a goddess of fertility and was often pictured as draped with eggs, or multiple breasts, symbols of fertility, from her waist to her shoulders, whereas The Greek Artemis is the goddess of the hunt. That shrine of goddess was first built in 800 B.C. but then it was destroyed and rebuilt several times over the next few hundred years. By 600 B.C., the city of Ephesus had become a major port of trade and an architect named Chersiphron was engaged to build a new large temple. He designed it with high stone columns. Though, this temple didn’t last long. In 550 B.C. King Croesus of Lydia conquered Ephesus and the other Greek cities of Asia Minor. During the fighting, the temple was destroyed. Croesus proved himself a gracious winner, though, by contributing generously to the building of a new temple. This was next to the last of the great temples to Artemis in Ephesus and it dwarfed those that had come before. 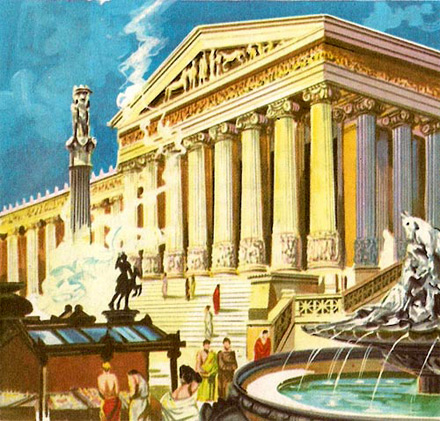 The name of new architect is thought to be a man named Theodorus. His temple was 300 feet in length and 150 feet wide with and area four times the size of the temple before it. This clearly depicts it overall magnificence. It’s often affirmed that more than one hundred stone columns supported a massive roof, which was grand for the spectator’s eye. The new temple soon became the pride of Ephesus until 356 B.C. when a tragedy, by name of Herostratus, struck on the earth.

Herostratus was a young Ephesian who would stop at no cost to have fame or just simply let his name go down in history. He managed this by burning the temple to the ground, which resulted in the total hatred, truculence and intolerance from the whole kingdom. The strictest penalty all over the Ephesus was sentenced to him; The appalled citizens of the city issued a decree that anyone who spoke of Herostratus would be put to death. But the story of the temple doesn’t end here. It was soon commissioned again.
[ADS2]
The new was Scopas of Paros, one of the most famous sculptors of his days. Besides, it’s worth to be mentioned that Ephesus was one of the prominent cities in Asia Minoor, thus no expense was spared in the construction. Well-known historians all over the world worshiped the construction and called it “wonderful monument of Grecian magnificence, and one that merits our genuine admiration.” The cause of astonishment was not only the temple itself but the four bronze statues of Amazon women.

According to Piny, construction took 120 years, though some experts suspect it may have only taken half that time. There even exists a story including the Alexander the Great, who came to Ephesus in 333 B.C when the temple was still under construction. He was willing his name to be carved on the temple, which was a matter of discussion among the fathers of the city, who didn’t want to cut and edge by denying Alexander’s request, but neither wishing to fulfill it. Thus, they found a way out by giving a tactful response: “It is not fitting that one god should build a temple for another god” and Alexander didn’t press the matter,”. 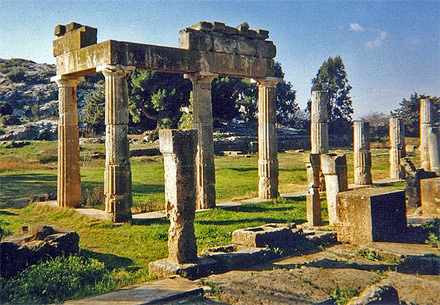 There is another story retelling how the goddess helped the architect to fix the wrongly incorporated stone beams, which were perched on top of the columns. The dream where the Artemis promised him to repair problem appeared to be true in the morning.

The city continued to prosper over the next few hundred years and was the destination for many pilgrims coming to view the temple. St. Paul a difficult time when he visited the city in 57 A.D. St. Paul came to the city to win converts to the new religion of Christianity. He was so successful that Demetrius feared the people would turn away from Artemis and he would lose his livelihood. He called others of his trade together with him and gave a rousing speech ending with “Great is Artemis of the Ephesians!” They then seized two of Paul’s companions and a near riot followed. Eventually the city was quieted, the men released, and Paul left for Macedonia. It was Paul’s Christianity that won out in the end, though.
[ADS2]
By the time the great Temple of Artemis was destroyed during a raid by the Goths in 262 A.D., both the city and the religion of Artemis were in decline. When the Roman Emperor Constantine rebuilt much of Ephesus a century later, he declined to restore the temple. He had become a Christian and had little interest in pagan temples. 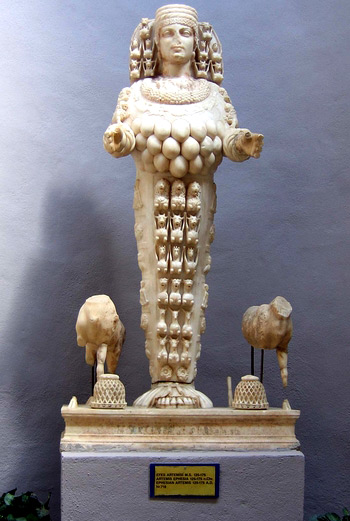 Despite Constantine’s efforts, Ephesus declined in its importance as a crossroads of trade. The bay where ships docked disappeared as silt from the river filled it. In the end what was left of the city was miles from the sea, and many of the inhabitants left swampy lowland to live in the surrounding hills. Those that remained used the ruins of the temple as a source of building materials. However, the amazing Temple of Artemis quelled its name in the history as one of the ancient wonders of the world and this status is purely deserved for it.