The Colossus of Rhodes was a statue of the Greek Titan Helios, erected in the city of Rhodes on the Greek island of Rhodes by Chares of Lindos between 292 and 280 BC. It is considered one of the Seven Wonders of the Ancient World. It was constructed to celebrate Rhodes’ victory over the ruler of Cyprus, Antigonus I Monophthalmus, who unsuccessfully besieged Rhodes in 305 BC. Before its destruction, the Colossus of Rhodes stood over 30 meters (107 ft) high, making it one of the tallest statues of the ancient world. 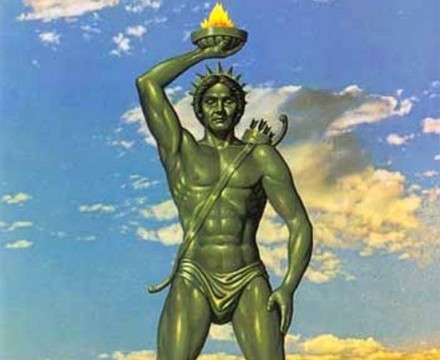 The storyline along the statue goes as following: The island of Rhodes was an important economic center in the ancient world. It is located off the southwestern tip of Asia Minor where the Aegean Sea meets the Mediterranean. The capitol city, also named Rhodes, was built in 408 B.C. and was designed to take advantage of the island’s best natural harbor on the northern coast. It was often the reason of wars which lasted for centuries. Capturing this blossoming territory meant holding the reins of the economic at hand. Thus, it was ruled by such well-known conqueror as Alexander the Great. After the death of Alexander the Great in 323 BC, his heritage was left without a assigned governor as much as Alexander couldn’t call the name of future emperor. Fighting broke out among his generals, the Diadochi, with four of them eventually dividing much of his empire in the Mediterranean area. As a result Ptolemy took control of Egypt, Rhodes and Ptolemaic Egypt formed an alliance which controlled much of the trade in the eastern Mediterranean.

Antigonus I Monophthalmus was upset by this turn of events. In 305 BC he had his son Demetrius Poliorcetes, also a general, invade Rhodes with an army of 40,000; however, the city was well-defended and it was nearly impossible to get through the walls, which was around the city. Demetrius tried to build number of siege towers in order to get access to the walls. But all was in vain.
In 304 BC a relief force of ships sent by Ptolemy arrived, and Demetrius’s army abandoned the siege, leaving most of their siege equipment. To celebrate their victory, the Rhodians sold the equipment left behind for 300 talents]and decided to use the money to build a colossal statue of their patron god, Helios. Construction was left to the direction of Chares, a native of Lindos in Rhodes, who had been involved with large-scale statues before.

Most likely the construction started in 292 BC; This belief seems more true even, though it’s often said that work over it began in 304 BC. However, according to Pliny, a historian who lived several centuries after the Colossus was built, construction took 12 years.

Modern engineers have put forward a plausible hypothesis for the statue construction, based on the technology of those days (which was not based on the modern principles of earthquake engineering), and the accounts of Philo and Pliny who both saw and described the remains.]The statue was one hundred and ten feet high and stood upon a fifty-foot pedestal near the harbor entrance perhaps on a breakwater. Although the statue has sometimes been popularly depicted with its legs spanning the harbor entrance so that ships could pass beneath, it was actually posed in a more traditional Greek manner. Historians believe the figure was nude or semi-nude with a cloak over its left arm or shoulder. Some think it was wearing a spiked crown, shading its eyes from the rising sun with its right hand, or possibly using that hand to hold a torch aloft in a pose similar to one later given to the Statue of Liberty. 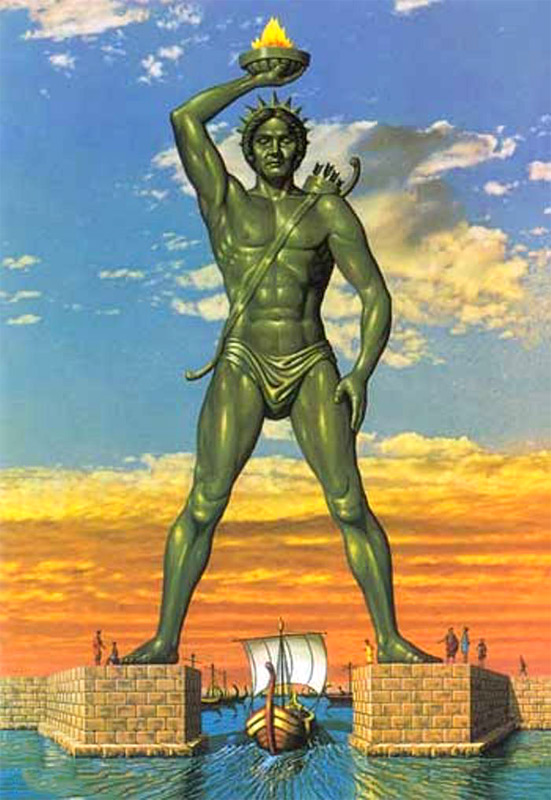 No ancient account mentions the harbor-spanning pose and it seems unlikely the Greeks would have depicted one of their gods in such an awkward manner. In addition, such a pose would mean shutting down the harbor during the construction, something not economically feasible.

The statue itself was constructed of bronze plates over an iron framework (very similar to the Statue of Liberty which is copper over a steel frame). According to the book of Pilon of Byzantium, 15 tons of bronze were used and 9 tons of iron, though these numbers seem low to modern architects. The Statue of Liberty, roughly of the same size, weighs 225 tons. The Colossus, which relied on weaker materials, must have weighed at least as much and probably more.
[ADS2]
Ancient accounts tell us that inside the statue were several stone columns which acted as the main support. Iron beams were driven into the stone and connected with the bronze outer skin. Each bronze plate had to be carefully cast then hammered into the right shape for its location in the figure, then hoisted into position and riveted to the surrounding plates and the iron frame.

Some stories say that a massive earthen ramp was used to access the statue during construction. Modern engineers, however, calculate that such a ramp running all the way to the top of the statue would have been too massive to be practical. This lends credence to stories that the wood from the Helepolis seige engine was reused to build a scaffolding around the statue while it was being assembled.

The architect of this great construction was Chares of Lindos, a Rhodian sculptor who was a patriot and fought in defense of the city. It is believed Chares did not live to see his project finished. There are several legends that he committed suicide. In one tale he has almost finished the statue when someone points out a small flaw in the construction. The sculptor is so ashamed of it he kills himself.
[ADS2]
The statue stood for 56 years until Rhodes was hit by the 226 BC Rhodes earthquakes, when significant damage was also done to large portions of the city, including the harbor and commercial buildings, which were destroyed. The statue snapped at the knees and fell over on to the land. Ptolemy III offered to pay for the reconstruction of the statue, but the oracle of Delphi made the Rhodians afraid that they had offended Helios, and they declined to rebuild it.

The remains lay on the ground as described by Strabo for over 800 years, and even broken, they were so impressive that many traveled to see them. Pliny the Elder remarked that few people could wrap their arms around the fallen thumb and that each of its fingers was larger than most statues. 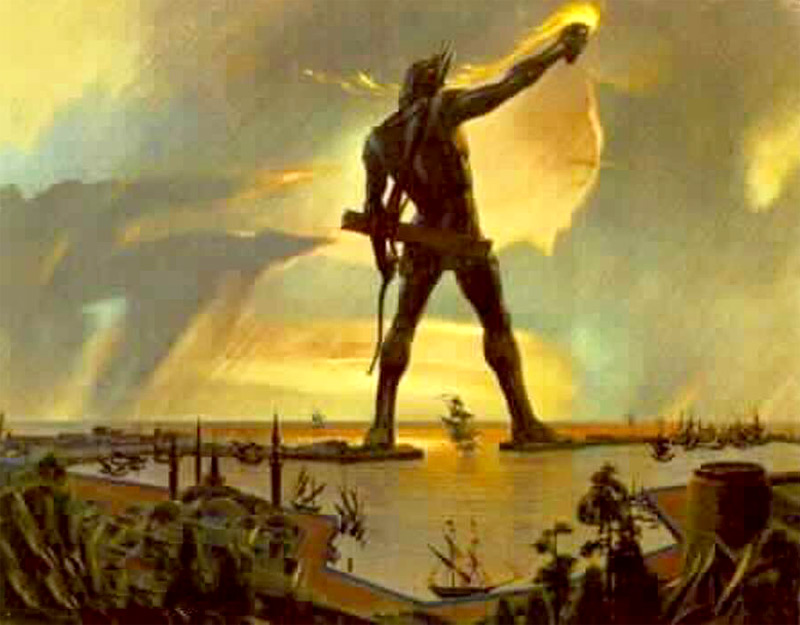 In 654, an Arab force under Muslim caliph Muawiyah I captured Rhodes, and according to the chronicler Theophanes the Confessor, the remains were sold to a “Jewish merchant of Edessa”. The buyer had the statue broken down, and transported the bronze scrap on the backs of 900 camels to his home.

The design, posture and dimensions of the Statue of Liberty in New York Harbor are based on what the Colossus was thought by engineers in the late 19th century to have looked like. Every person that gets an opportunity to travel to New York gets marvelous sight, Standing on a small island in the harbor is an immense statue of a robed woman, holding a book and lifting a torch to the sky. The statue measures almost one-hundred and twenty feet from foot to crown. It is sometimes referred to as the “Modern Colossus,” but more often called the Statue of Liberty. 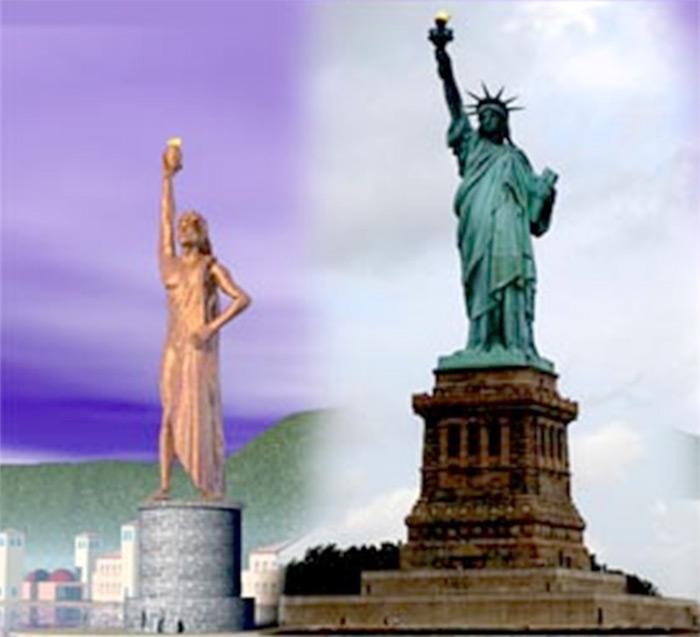 This awe-inspiring statue was a gift from France to America and is easily recognized by people around the world. What many visitors to this shrine to freedom don’t know is that the statue, the “Modern Colossus,” is the echo of another statue, the original colossus, which we have talked so much about above, that stood over two thousand years ago at the entrance to another busy harbor on the Island of Rhodes. Like the Statue of Liberty, this colossus was also built as a celebration of freedom.