The Lighthouse of Alexandria was one of the Seven Ancient Wonders of the World. It was situated on the small offshore island of Pharos, lighting the way for many sailors navigating the tricky harbor. This place was considered to be one of the centers of the civilization by the time it was build. However it needs to be mentioned that Pharos actually was not a true island: It was connected to the mainland by a dike, called the Heptastadion. In this way, Alexandria had two harbors, one on either side of the dike. 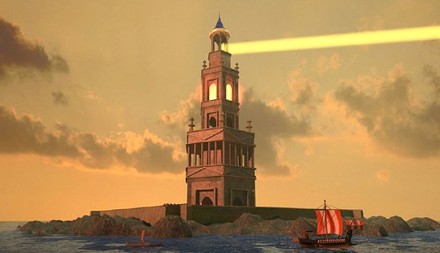 The story of the Pharos itself started with the founding of the city of Alexandria by the Macedonian conqueror Alexander the Great in 332 B.C.. Alexander founded and called upon his name at least 17 cities named Alexandria at different locations in his vast domain. Time after time most of them disappeared, but Alexandria in Egypt thrived for many centuries and is prosperous even today.

The city of Alexandria was built some twenty miles to the west of Nile Delta, in order to protect the harbor from the silt and mud carried from the river itself. Though, the city had two harbors inasmuch the Lake Mateoris was located in the south as well. Thus, the activities which were conducted from both sides of the city were the main source of its immense treasure and income.

After the death of Alexander the Great, in 323 B.C. , Photemy Soter ruled over the Egypt, who managed to be the successful legatee of former sovereign and made the city even more prosperous and famous for its wealth. Therefore, the harbor was busy as never, so Photemy clearly saw the need of a symbol, a sign which could give a guide to the trade ships. As a result, he authorized the building of the Pharos in 290 B.C., and when it was completed some twenty years later, it was the first lighthouse in the world and the tallest building in existence, with the exception of the Great Pyramid.

Besides its height which was amazing by that period, the sum of the expenses which were spent over the construction was said to have been 800 talents, an amount equal today to about three million dollars.

It is purely impressive how wonderful the construction technique, unbelievable extents, beauty of the creation was in Egypt that two of its buildings, the Pyramid of Giza, at the beginning of Egypt history and the second the lighthouse of Alexandria, built by one of the last pharaohs, Photemy I Soter, who couldn’t even witness the completion of the construction because of his death.
[ADS2]
Pharos Lighthouse stood on the eastern point of Pharos Island some distance from the city center of Alexandria. It was constructed at the beginning of the third century BC over a period of about twelve years and took an enormous cost and usage of considerable slave labor. As far as we mentioned Pharos Lighthouse was completed and inaugurated by the first Ptolemy’s son, Ptolemy Philadelphus, in 283. The festival he held that day, 279 BC was attributed to his parents. However, it didn’t maintain the original look, but it underwent a number of modifications by later rulers. The architect was Sostratos, a Greek from the Asia Minor city of Cnidus, whose name also appears on the sanctuary of Appolo at Delphi and on Delos. Though only the king’s name was allowed on buildings erected during their reigns in the period, Sostratos got around this by also carving his own with a dedication, which was then covered with plaster. The consecration in honor of Ptolemy was then carved into the plaster, which over time peeled away leaving only Sostratos dedication, which provides, “Sostratos of Cnidus, son of Dexiphanes, to the savior gods, for sailors. “

The lighthouse was apparently a tourist attraction from the very beginning. We are told that food was sold to visitors at the observation platform at the top of the first level. A smaller balcony provided a view from the top of the eight-sided tower for those that wanted to make the additional climb. The view from there must have been impressive as it was probably 300 feet above the sea. There were few places in the ancient world where a person could ascend a man-made tower to get such a perspective.

The writings indicated that the structure consisted of4 main sections. At the bottom was a platform filled with statues that are still being discovered by present-day divers off the coast of Alexandria. Some researchers believe that ships docked just off this platform as well. 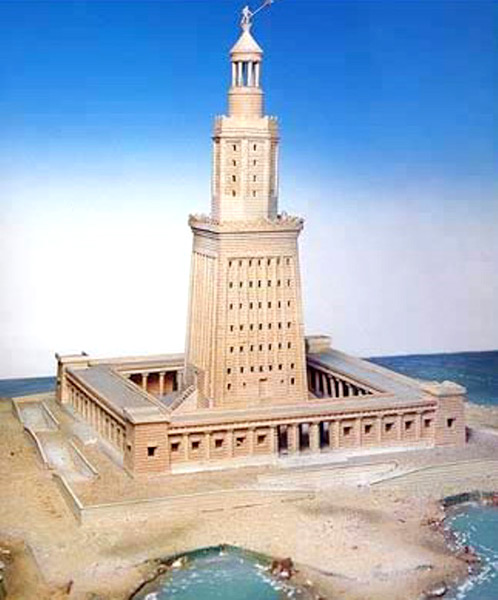 On top of this platform stood a square structure measuring 18 m (60 ft) on each side and roughly 56 m (184 ft) tall. In the middle of this section is a shaft and stairwell used for transporting material and fuel up the Pharos Lighthouse, and for visitors as well.

The third section was an eight-sided structure measuring roughly 27 m (90 ft) high. It also contained a similar transportation shaft in the middle. On top of this was a circular tower that housed the fire (for use to alert ships during the night) and the great mirror (for use during the day). A statue of Poseidon stood on top this tower.

It is purely wonderful how the architects of the Pharos Lighthouse could impress event engineers of today’s skyscrapers. They show similarities in so many cases. The lighthouse is measured up to a modern 40-story building. The Greeks were so impressed with it that they included it as one of the Seven Wonders of the Ancient World.
[ADS2]
The mirror of the Pharos Lighthouse appeared to be quite famous in ancient times. Many people believed that the mirror was so smooth and powerful that it could be used to reflect the sun’s rays onto invading ships and burn them.

Another belief was that the mirror was so strong it could be used to observe and spy on competing city-states across the Mediterranean Sea, more than 100 miles away. However, it is highly unlikely that either of these stories are true.

From historical evidence, it appears that the Pharos Lighthouse was also a touristattraction. Hundreds of visitors climbed the Lighthouse everyday to enjoy the fantastic view around Alexandria. Food vendors also sold their goods at the top of each section of the Pharos.

The lighthouse was built on the island of Pharos and soon the building itself acquired that name. The connection of the name with the function became so strong that the word “Pharos” became the root of the word “lighthouse” in the French, Italian, Spanish and Romanian languages.

The fact is that the lighthouse doesn’t exist any longer, but the history records confirm its subsistence. The question appears: how it’s possible that this huge building, being an eye of spectators disappear without leaving any ruins of itself. It’s believed that the lighthouse winded up in the Mediterranean. Most accounts indicate that it, like many other ancient buildings, was the victim of earthquakes. It stood for over 1,500 years, apparently surviving a tsunami that hit eastern Mediterranean in 365 AD with minor damage. After that, however, tremors might have been responsible for cracks that appeared in the structure at the end of the10th century and required a restoration that lowered the height of the building by about 70 feet. Then in 1303 A.D., a major earthquake shook the region that put the Pharos permanently out of business. 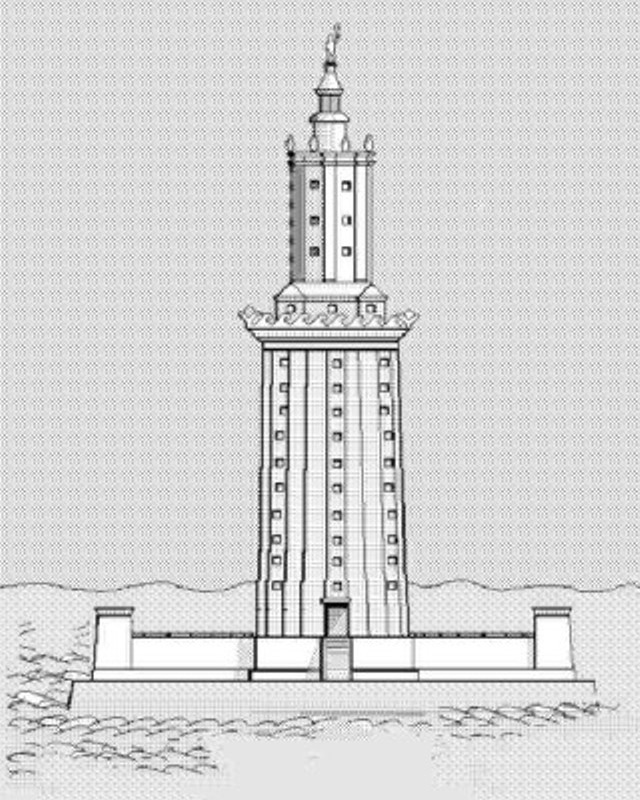 There is also an unlikely tale that part of the lighthouse was demolished through trickery. In 850 A.D. it is said that the Emperor of Constantinople, a rival port, devised a clever plot to get rid of the Pharos. He spread rumors that there was a fabulous treasure buried under the lighthouse. When the Caliph at Cairo, who controlled Alexandria at this time, heard these rumors, he ordered that the tower be pulled down to get at the treasure. It was only after the great mirror had been destroyed and the top two portions of the tower removed that the Caliph realized he’d been deceived. He tried to rebuild the tower, but couldn’t, so he turned it into a mosque instead.

As colorful as this story is there does not seem to be much truth in it. Visitors in 1115 A.D. reported the Pharos intact and still operating as a lighthouse.

Did the divers actually find the remains of Pharos in the bottom of the harbor? Some of the larger blocks of stone found certainly seem to have come from a huge building. Statues were located that may have stood at the base of the Pharos.

← The Mausoleum of Halicarnassus
Colossus of Rhodes →