The Mausoleum of Halicarnassus

The existence of the Mausoleum of Halicarnassus is densely connected to the storyline about King Mausoleus ruling. In order to get to the roots why this world-wide known tomb was decided to be built in 377 B.C we need to page back the history and search the true reasons there. By that time the city of Halicarnassus was a capitol of small kingdom along the Mediterranean coast of Asia Minor. 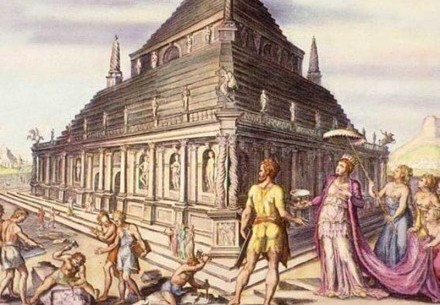 These lands were ruled by Hecatomnus, who came from Malaysia. He was a local satrap too Persians and therefore was well-known for his ambitious, arrogant character as he has concurred and took control over the several neighboring cities and districts. Through his lifetime he managed to extend his territory inasmuch that it included most of the Southwestern Asia Minor. After his death, his whole kingdom was transmitted to his only legitimate heir, Mausoleus, who together with his wife ruled over it during next 24 years. His wife was his own sister Artemisia, (It is worth to be mentioned that it was the custom in Caria for rulers to marry their own sisters). It was often said that Mausoleus was way too much descended from the local people, spoke Greek, and admired everything what was connected to Greece and Greek culture. Thus, he founded several Greek cities along the coast and encouraged their democratic traditions.

In 353 B. C Mausoleus died and left his beloved wife with huge grief and sorrow. She couldn’t think of anything else rather than building something what would immortalize his name for centuries. Hence, she decided to build him the most splendid tomb in the known world. 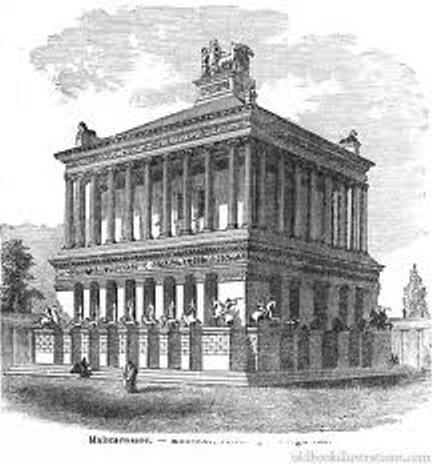 Its stucturebecame so famous that Mausolus’s name is now associated with all grand tombs through our modern word mausoleum. The building was also so beautiful and unique it became one of the Seven Wonders of the Ancient World.

According to Queen Artemisia’s decision the most talented artists of that time have to be found through all the Greece and she would spent a fortune that the tomb to be worth of gods. As a result her messengers brought Scopas, the man who was already famous for supervising the reconstruction of the Temple of Artemis. Other famed sculptors such asBryaxis, Leochares and Timotheusjoined him together with other craftsmen.

It is of common interest to describe how did the tomb look like. The tomb was erected on a hill overlooking the city. The whole structure sat in an enclosed courtyard. At the center of the courtyard was a stone platform on which the tomb itself sat. One could find a staircase there, flanked by stone lions, led to the top of this platform. Along the outer wall of this were many statues depicting gods and goddess. At each corner stone warriors, mounted on horseback, guarded the tomb. It is purely obvious how impressive these warriors could look like for the visitor’s eyes.

The tomb itself was located at the center of the platform. Made mostly of marble, the structure rose as a square, tapering block to about one-third of the Mausoleum’s 140 foot height. This was a section, which was covered with relief sculpture showing action scenes from Greek myth and history. One part showed the battle of the Centaurs with the Lapiths. Another depicted Greeks in combat with the Amazons, a race of warrior women.

On top of this section of the tomb thirty-six slim columns, nine per siderose for another third of the height. Standing in between each column was another statue. Behind the columns was a solid block that carried the weight of the tomb’s massive roof.

The roof had a genuinely unique shape. It comprised most of the final third of the height and was in the form of a stepped pyramid. On the top of the tom there was astonishing sculpture perched. It depicted four massive horses pulling a chariot in which images of Mausolus and Artemisia rode. 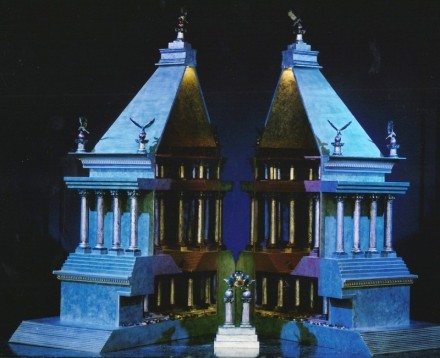 However, the tomb wasn’t finished yet. The major construction was built and right after that Artemisia found herself in crisis. Among the territories conquered by Mausolus, was Rhodes, an island in the Aegean Sea between Greece and Asia Minor. When the Rhodians heard about the death of the King Mausolus, they rebelled and sent a fleet of ships to capture the city of Halicarnassus. Knowing that the Rhodian fleet was on the way, Artemisa hid her own ships at a secret location at the east end of the city’s harbor. After troops from the Rhodian fleet disembarked to attack, Artemisia’s fleet made a surprise raid, captured the Rhodian fleet, and towed it out to sea. Afterwards she even put her soldiers on the invading ships and made them flee back to their land. Rebellion was quelled inasmuch that Rhodians couldn’t manage to defend the city and it was easily captured.

Hence, Artemisa lived for only next two years after the death of her husband. Both were meant to be buried in the yet unfinished tomb. However, according to the historian Pliny, the craftsmen decided to stay and finish the work after their employer died “considering that it was at once a memorial of their own fame and of the sculptor’s art.”
It’s still not clear how long the Mausoleum exactly existed. It overlooked the city of Halicarnassus for many centuries. It was untouched when the city fell to Alexander the Great in 334 B.C. and still undamaged after attacks by pirates in 62 and 58 B.C.. It stood above the city ruins for some 17 centuries. Then a series of earthquakes shattered the columns and sent the stone chariot crashing to the ground. By 1404 A.D. only the very base of the Mausoleum was still recognizable.

Afterwards Crusaders had occupied the city from the thirteen century onward. In 1522 rumors of a Turkish invasion caused Crusaders to strengthen the castle at Halicarnassus, by the time known as Bodrum. Much of the remaining portions of the tomb was broken up and used within the castle walls. Indeed sections of polished marble from the tomb can still be seen there today.

The knights who have been wandering in the tomb, eventually entered the base of the monument and discovered the room containing a great coffin. They decided it was too late to open it that day, after returning the next morning to find the tomb, and any treasure it may have contained, discovered it was stolden. It just disappeared without any trace and the bodies of Mausolus and Artemisia were missing too. The Knights claimed that Moslem villagers were responsible for the theft, but it is more likely that some of the Crusaders themselves plundered the graves. 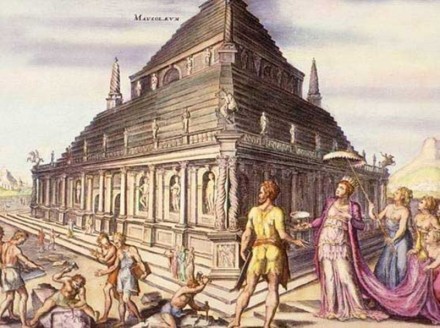 Before grounding much of the remaining sculpture of the Mausoleum into lime for plaster the Knights removed several of the best works and mounted them in the Bodrum castle. There they stayed for three centuries. At that time the British ambassador obtained several of the statutes from the castle, which now reside in the British Museum.

In 1846 the Museum sent the archaeologist Charles Thomas Newton to search for more remains of the Mausoleum. He had a difficult job. He didn’t know the exact location of the tomb and the cost of buying up all the small parcels of land in the area to look for it would have been astronomical. Instead Newton studied the accounts of ancient writers like Pliny to obtain the approximate size and location of the memorial, and then bought a plot of land in the most likely location. Newton then excavated the site he thought most likely to be the Mausoleum territory and found sections of the reliefs that decorated the wall of the building and portions of the stepped roof. Also a broken stone chariot wheel, some seven feet in diameter, from the sculpture on the roof was discovered. Finally, he found the statues of Mausolus and Artemisia that had stood at the pinnacle of the building.
Today these works of art stand in the Mausoleum Room at the British Museum. There the images of Mausolus and his queen forever watch over the few broken remains of the beautiful tomb she built for him. However, it will always stay in a full attention for historians and archeologists.