Rome will praise until the Coliseum exists

The Coliseum, also known as “Amphitheatre Flavio”, is a monumental structure that has fallen into ruins, but even today it is an imposing and beautiful sight for thousands of people around the world. 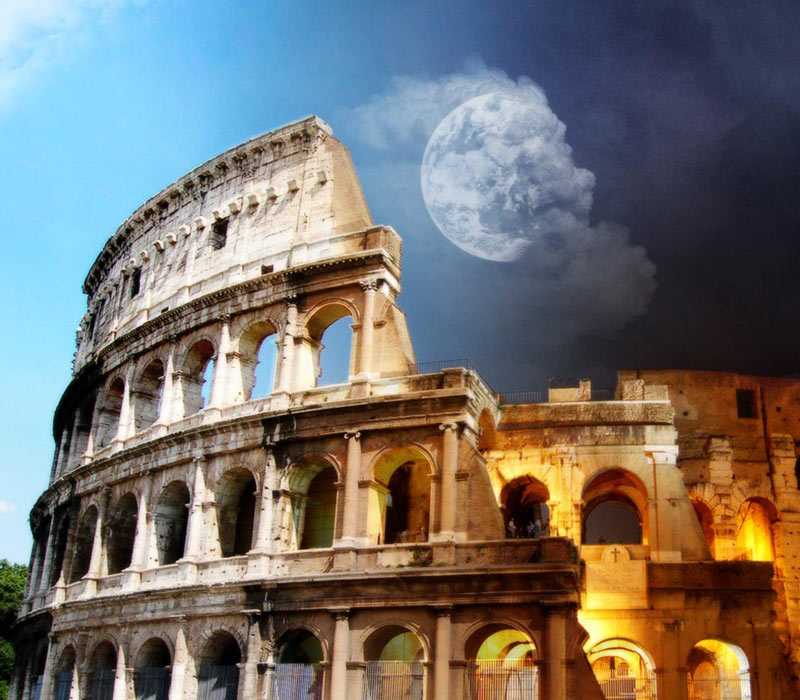 It was built on the order of the Imperator Vespasiano in the honour of the grandiosity of his empire, and was inaugurated by his son, Tito, in 80 after Christ with celebrations 100 days long. It is the largest thing ever built in the Roman Empire. It is considered one of the greatest works of Roman architecture and Roman engineering. 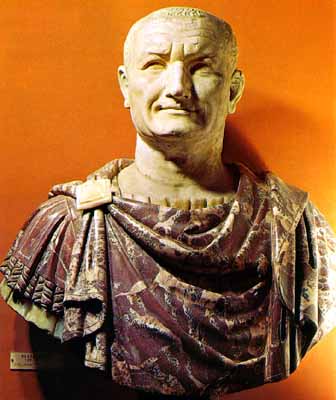 The name Coliseum probably comes from the big bronze statue of about 38 metres, known as the “Colosso”-giant, that Nerone wanted built on his image in the Domus Aurea. The work, representing the Imperator in the pants of the God Apollo, wanted to call back to the mind, with its extraordinary dimensions, the prestige and the fascination that another symbol of the Antiquity had had: the Colosso of Rhodes.

The statue was not situated as it is from the very beginning, but then it was moved by the Imperator Adriano close to the Amphitheatre and afterwards modified in its lines in order to look like to various imperators on one hand, and then, on the other hand, with the addition of a “crown of sun rays”, to the God Sun. However, it was only in the middle ages, that the name Coliseum started to take the place, in the common diction, of the name of “Amphitheatre Flavio”.

The Coliseum, projected by Rabirio or maybe Gaudenzio, was welcoming long combats between gladiators, executions and hunting spectacles. The combats could go on from the sunrise to the sunset and also up to the deepest night when the gladiators were fighting illuminated by the light of the torches.

Still the question renders. Who were the ones fighting their lives and what was the price for it? Was it deliberate action or something they were obliged to do? Reviewing the history will bring us to the answer that Roman gladiators were usually slaves, prisoners of war or condemned criminals. Most were men, but there were a few female gladiators. These combats were attended by the poor, the rich, and frequently the emperor himself. As gladiators fought, vicious cries and curses were heard from the audience around the Roman Coliseum. One contest after another was staged in the course of a single day. Should the ground become too soaked with blood, it was covered over with a fresh layer of sand and the performance went on. The gladiatorial games continued until Christianity progressively put an end to those parts of them which included the death of humans. 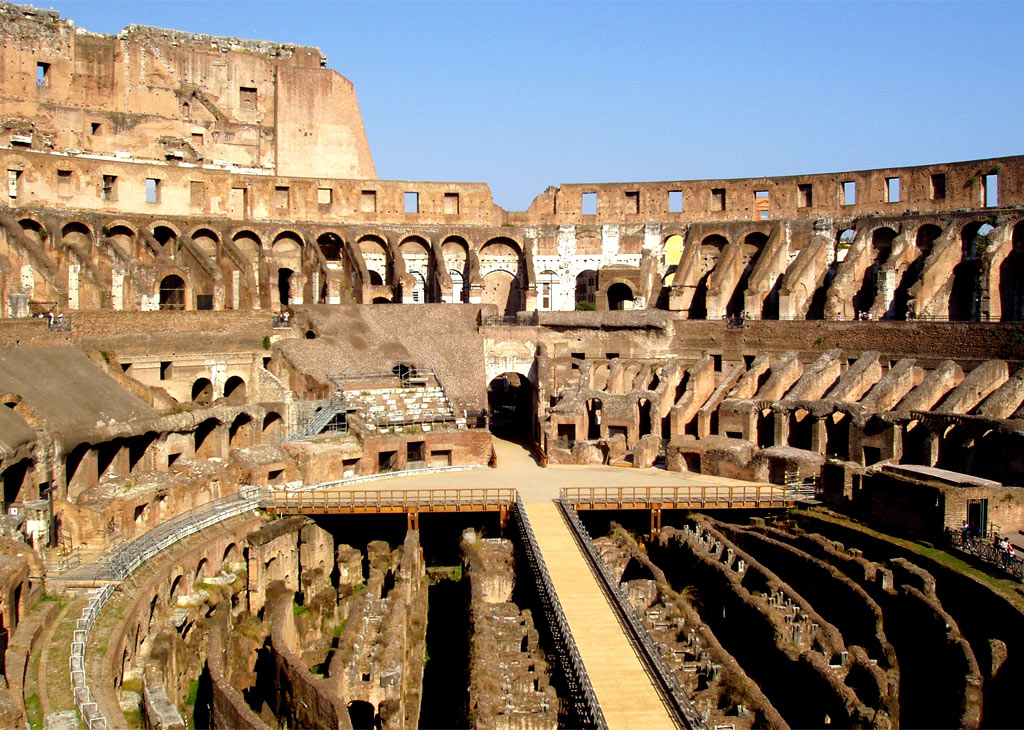 According to the chronicles of the time it looks like that the fights preferred by the public were the chaotic mélange of tens of gladiators invented by the Imperator Claudio, called “sportule”. All the religious celebrations, the recurrence and the military victories were celebrated, during the imperial era, with the combats of the gladiators. To defend the spectators from the ferocious animals they were installing a metallic fence, while during the most sunny days or the raining days, the public was protected by a big blue “velario” with yellow stars operated by a team of sailors of the fleet of Capo Miseno and of Ravenna.
[ADS2]
In general, Christian martyrs were often associated with the Coliseum itself, also if, according to recent studies, there are not documented proofs demonstrating the effective existence of massacres and slaughters inside the walls of the Amphitheatre Flavio. In any case, it is obvious that in 313 after Christ, the Imperator Constantine proclaimed Christianity the official religion of the empire, obviously forbidding the executions of Christians but also the combats between gladiators and the hunting spectacles.

During the following centuries the Coliseum initially became a cemetery, and then a fortress called “Frangipane” and finally a sort of cava for the construction materials. The degradation of the structure due to fires, earthquakes and sacks was stopped by Pope Benedetto XIV who consecrated the Amphitheatre to the Via Crucis and forbade any ulterior spoliation.

It is strongly believed that the Coliseum with its stunning grand look could attain at least 50,000 spectators. Today, some performances for the amusement of the visitors and travellers are still held outside the enormous amphitheater. 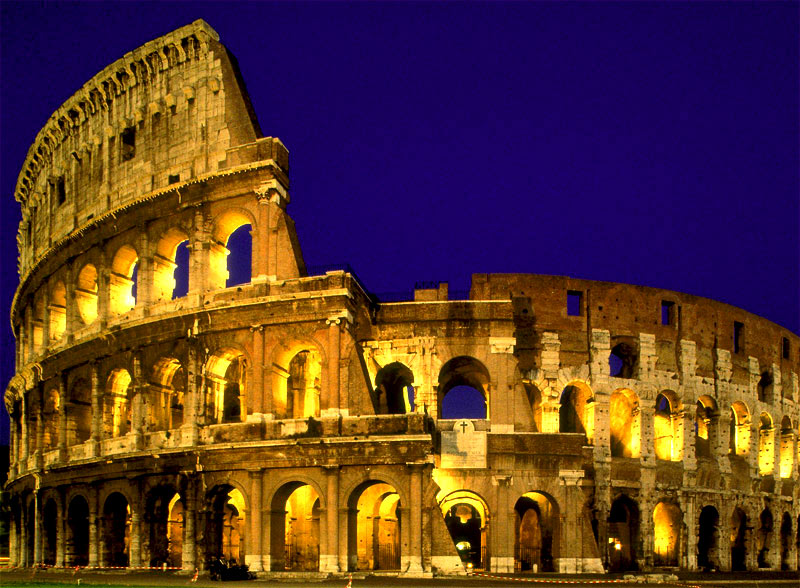 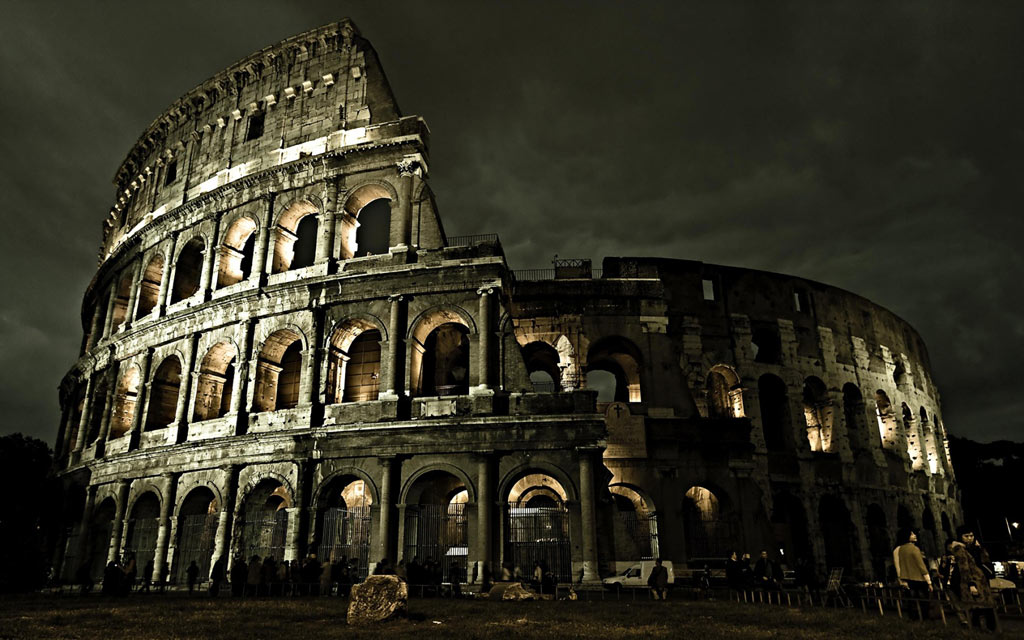 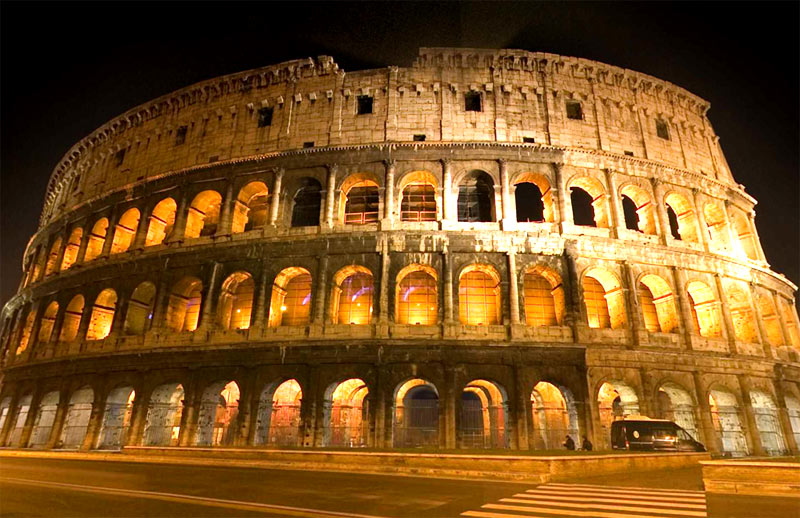 Although it is now in a ruined condition due to smash up cause by earthquakes and stone-robbers, the Coliseum has long been seen as an iconic symbol of Imperial Rome.

Major restoration efforts have been preserving the structure. It is important to emphasize that the ancient amphitheater is part of the UNESCO World Heritage Centre in Rome, and one of Rome’s most popular tourist attractions. In 2007, the Colosseum was also named one of the New 7 Wonders of the World.