Pyramid of the Sun, Moon and Dead Path in Mysterious city of Teotihuaca

Teotihuacan (Teotihuacán) is one of the most famous tourist attractions in Mexico City with two thousand years of Indian temple complex, which is the foundation and the dominant with two huge stepped pyramids – Pyramid of the Moon and the Pyramid of the Sun.

Teotihuacan is located just 50 km north-east of the capital of Mexico – Mexico City.

The road to the Teotihuacan outside Mexico City is about an hour.

This once-major town, about 25 miles northeast of Mexico City, is of great interest to archaeologists as the oldest city in the Western Hemisphere. The first settlement was founded here in the I. BC. and was a cluster of villages united around a mysterious caves formed by lava during the eruption of the volcano. The caves have been central to the mythology of Mesoamerica.

In Teotihuacan several mysterious monuments remained, revered not only in the country but especially,all over the world: Pyramid of the Sun – one of the largest buildings in the history of the Western Hemisphere, the Pyramid of the Moon and the Paths of the Dead, a wide street, flanked by the ruins of numerous temples . Mysterious buildings are decorated with frescoes, clearly illustrating mythological subjects. The Aztecs, who found the mysterious ruins, decided that this was a place where gods were born, and call it the “City of the Gods”, Rica.

The Aztecs believed that the area had the mystical door to the afterlife and through them the human would lead to world gods and its own ancestors. Teotihuacan caused special reverence by the four naturally shaped protrusions that symbolized parts Mesoamerican cosmos. In the II century A. C. the Pyramid of the Sun was built above the cave. By this time, the settlement became an important administrative center, culminating and flourishing of which continued around 700-750 years.

It is interesting to have the glance at the pyramid itself as far as the strongest impression one can get is exactly there.Mystical Pyramid of the Sun is the third highest of the pyramids in the world. 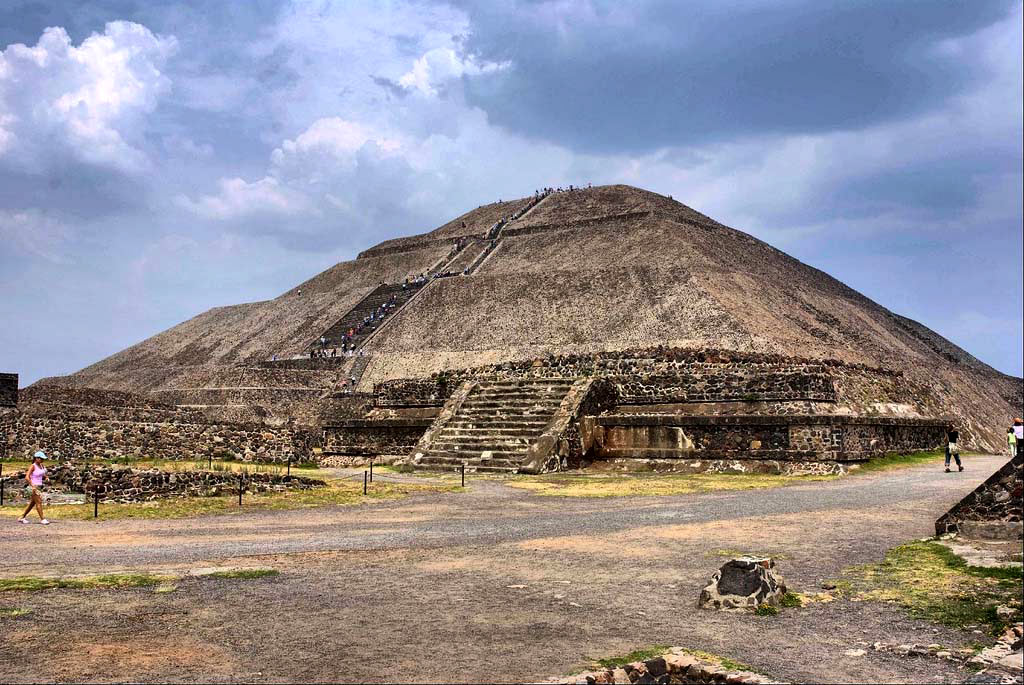 This massive structure is made of rubble, clay and soil, lined with stone and topped with a wooden temple. Mysterious pyramid was discovered and first studied by Leopoldo Batres in the first decade of the XX century. These excavations were carried out in 1992-1993 under the sponsorships of the Mexican National Institute of Anthropology and History with the supervision of Eduardo Matos Moctezuma.

Initially, the base area of the pyramid was about 215 square meters, height – 63 meters. Later, it extended at least twice. Today, the length of each side of the base is 225 meters.

At the heart of the city lies a place known as “The Citadel.” Inner area, which sat up to one hundred thousand people and was half of the population of the city by that time, was limited to four massive pyramids. The heart of the complex was Pyramid Feathered Serpent (Quetzalcoatl). To reconnect two rooms: the North and South palaces were used not only as an administrative center, but also to live and work. These structures have been found during excavations conducted by the National Institute of Anthropology and History.

For the short information about the dead road:

it was 1.5 miles long and played a role of the main artery for Teotihuacan. Starting from the Plaza of the Moon in the northern part of the city, it guided to the Citadel, the city market and the southern complex of temples. Possibly earlier road continued on, towards the mountains. The central part, which is located between the Pyramid of the Moon and the river San Juan, on the sides of the platforms was limited. The road passed under a complex drainage system serving the houses on both sides.

Pyramid of the Moon is located at the northern end of the Paths of the Dead, and remains the most mysterious structure of the city. 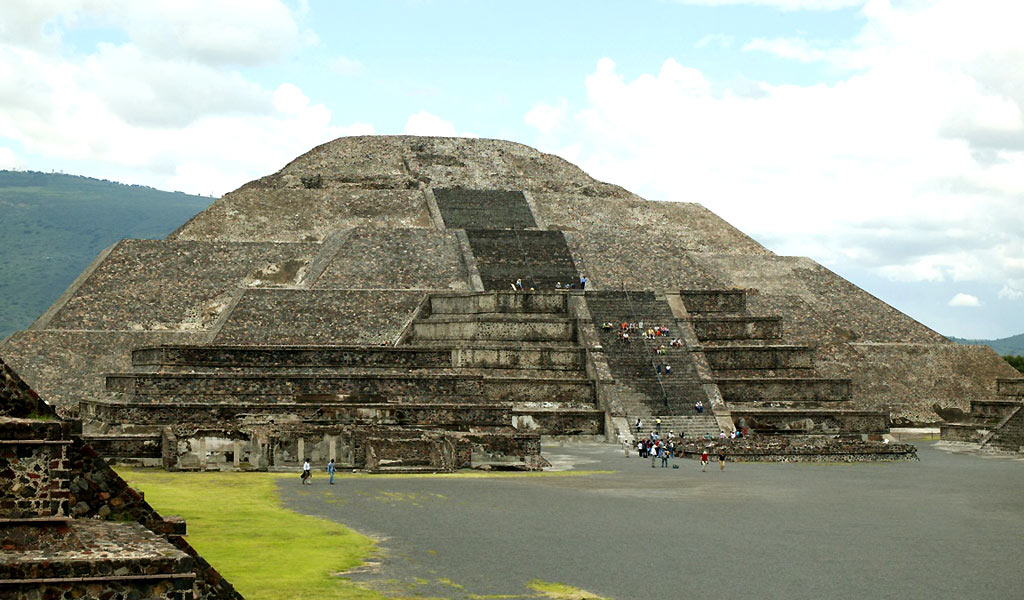 Recent studies carried out here under the guidance of Associate Professor of Japanese Aichi Prefectural University Saburo Sugiyama, revealed tombs, which referred to the fifth phase of the creation of this pyramid. Here, were found: four human skeletons, animal bones, shells, jewelry. However, there was an earlier mysterious tomb detected, referring to the fourth phase of construction, with the skeleton of the sacrificed person, also the remains of animals and gifts. Commenting on the latest discovery, Sugiyama said, “As a result of recent studies, we found indisputable evidence of militarism inherent in this culture from the earliest stages of its development.” Social and cultural changes that illustrate the differences in styles typical of the fourth and fifth phases of construction, could also be reflected in the buildings Feathered Serpent Pyramid and the Pyramid of the Sun. The last two temples were built about the same time and much later than the Pyramid of the Moon.

The reasons,what led to such developed city’s weakening and deterioration, stays quite vague and mysterious. Simply, nearly nothing is known about it. Obviously, there was some catastrophe, but it remains a mystery why, leaving the city, residents tried to break up the base and burn everything that they have created over the centuries. However, perhaps the truth behind the mystery is that all above mentioned was caused by invaders.

According to one of the mystical legend, the world was destroyed and re-created four times – jaguars, fire, wind and flood. The last time the gods gathered at Teotihuacan to decide which of them should jump into the ritual fire and for the fifth time to revive life. The choice fell on Nanauatzina, which is building up a fifth sun shone all mankind.

True or not, this place still attracts dozens of visitors every year and stays one of the most mysterious places in the world. Thus, the travelers, who are keen on exploring in deep histories and making discoveries are more than welcome to Mexico.

← Cusco – the center of the world
The Egyptian Calendar →