Nemrut Dag – The Mountain of the gods 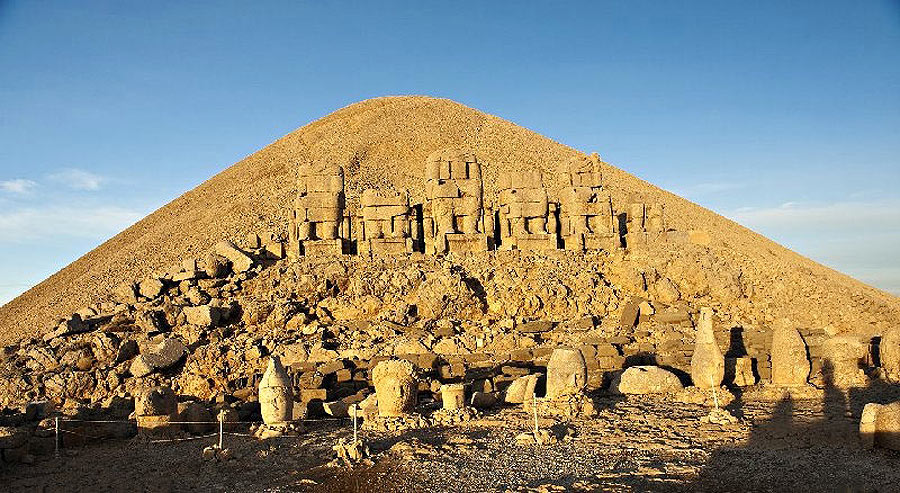 Sanctuary and mega mausoleum on Mount Nemrut Dag is one of the most famous attractions of Turkey and the main sanctuary of the ancient kingdom of Commagene. Pictures of huge heads and offer to go on tour to Nemrut Dag can be found in almost any travel agency in Turkey.

But nevertheless, not everyone has been on Nemrut, and here we talk not only about foreigners who have visited Turkey once, but even Turkish Cypriots who have resided in the country through years. There could be several reasons found for this. First of all, it is in the East of Turkey, far enough. Secondly, a visit to Nemrut Dag is during limited times of the year.

Generally, Nemrut Dag is not only a mountain, but also a National Park. Furthermore, there is not only pantheon, which visitor can look through (those of the heads), but also lot more which has been kept through centuries of debris, as once here was located the Commagene kingdom.

Once, approximately on the 2ndcentury BC, Mount Nemrutlaid on the territory of the state of dwarf Commagene. Though the state was small, it appears to have been very proud at the same time. This particularly applies to the rulers. King MithridatesI, nicknamed Kalinikos, which means “beautifully wins”,on this spot arranged parochial Olympic Games and has been directly involved in them. However, King Antiochus I 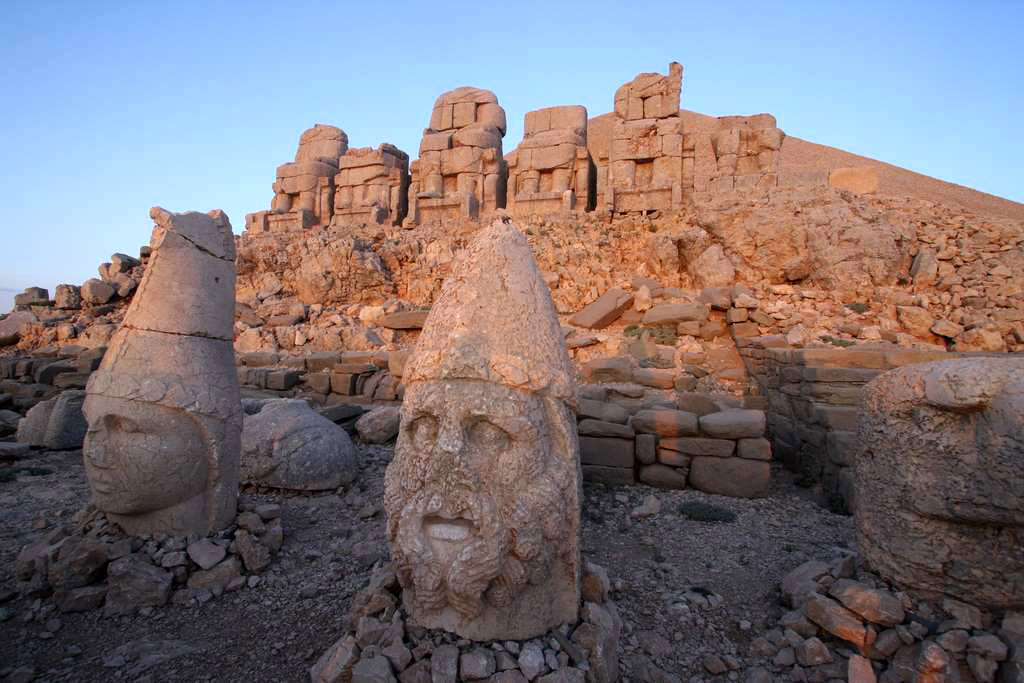 surpassed all kings. Bearing in mind that he had the Greek and Persian roots and moreover, he imbibed the western and eastern world, Antiochus set up his own religion. At the same time, he ranked himself as God. Mount Nemrutwas declared as a religious center. Antiochus started to build ritual complex. Although, having a plan of widely spreading his religion, and to finish the complex to the end, Antiochus failed. This process was stopped with an unexpected death of the ruler. After this, the existence of Commagene Nemrut was forgotten. It was found by Crusaders. However strange it should not sound, nobody paid attention to this fact and it was again forgotten. Next time the mountain Nemrutwas discovered in 1881 by engineers and geologists from Germany Karl Sisters. Karl did not find what he was looking for, but reopened the World Nemrut Dag. Serious studies about Nemrut Dag began only in the middle of the 20th century.

At the top of Mount Nemrut 3 terraces are cut – the eastern, western and northern. There are numerous statues of gods, up to 10 meters in height, which used to be one-piece sculptures.

But, after the earthquake in these areas, the heads fell down. Now they are located nearby their bodies. Terraces are surrounded by a man-made hill which amounts to 50 meters in height and 152 meters in diameter. It is believed, that somewhere in the bowels of the hill, Antiochus is buried himself. Unfortunately, this is only speculation and rumors, which has not been proved by any evidence.

Before one would see the sacred heads of the gods, he/she has to overcome some 2 kilometers walking path of the stone steps. They lead to the sanctuary on the eastern terrace Nemrut Dag.

According to the reconstruction of the sanctuary on the eastern terrace looked like Nemrut: 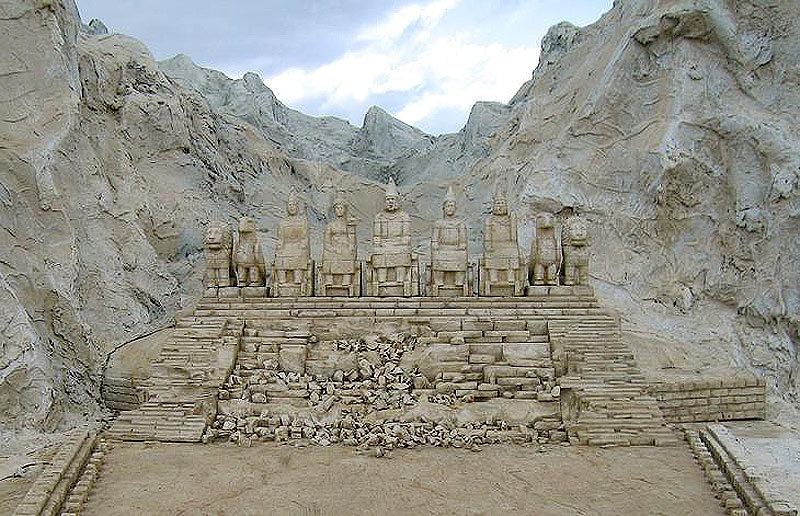 Gods are in a sitting position, which is quite unusual one. According to Antiochus, here was a home of the Gods, where they relaxed their heavenly thrones.

The figures are made of limestone, and the bodies of the gods are built of massive blocks. Once, the pieces of the figures were polished. It is interesting to observe that while constructing this place, the idea of guarding gods was considered. One can see the lion and an eagle. 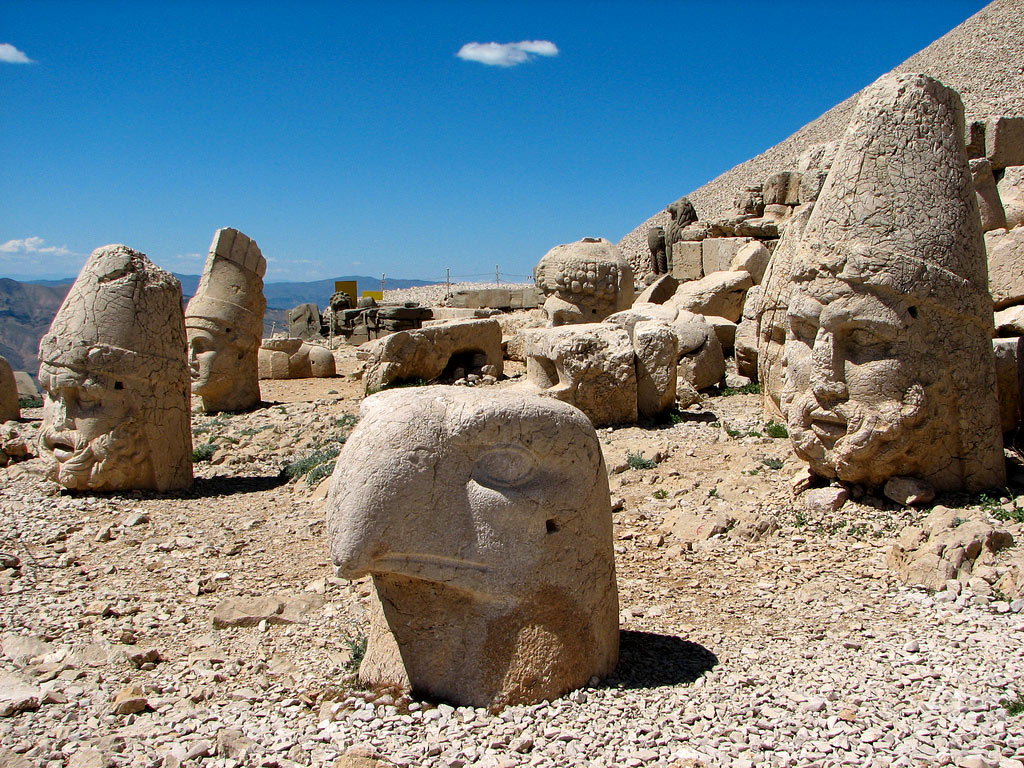 In front of the Statues there is a platform on which the sacrificial fire was being ignited. Now this platform is used as a convenient place to take pictures and to meet the sunrise.

Going round the hill one can reach the West Terrace. West Terrace of Nemrut Dag is not as large as the East. Here, the gods are closer to the people, instead of looking down on them from above. On the western terrace there are all the same characters: Antiochus, Tyche, etc. On the sides of the figures are the ancestors of Antiochus, both from the Persian and the Greek side. 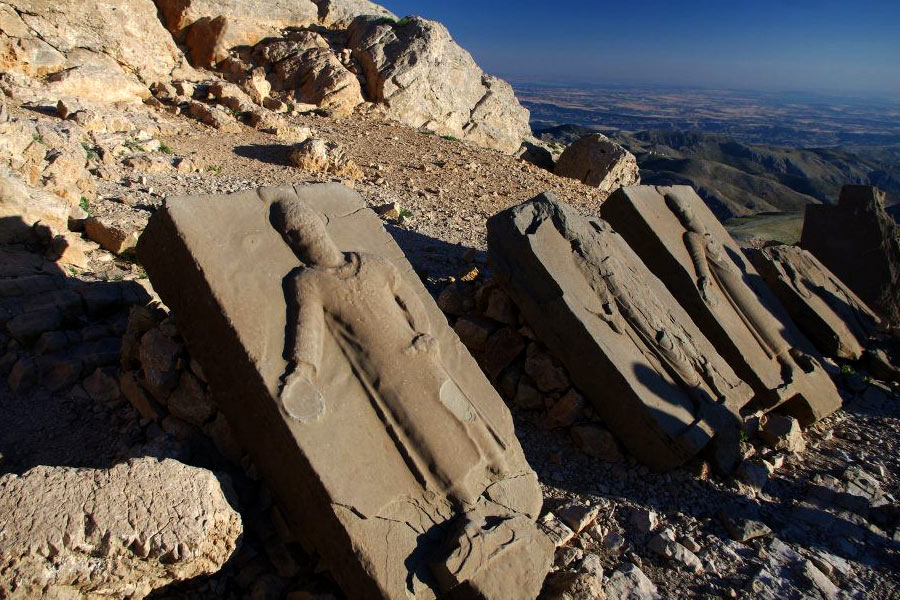 North Terrace of Nemrut Dag was intended to be a gathering place for people during ceremonies. Nearly all times the procession moved towards the eastern terrace, hence not much of it is left for visitors.

Nowadays around Nemrut Dag there is nothing but mountains. And before that, it was part of the kingdom. Something of this kingdom can be seen today,but one cannot have this feeling during walking around by feet, because sites are located at a great distance from each other, thus the connection chain is difficult to ascertain. 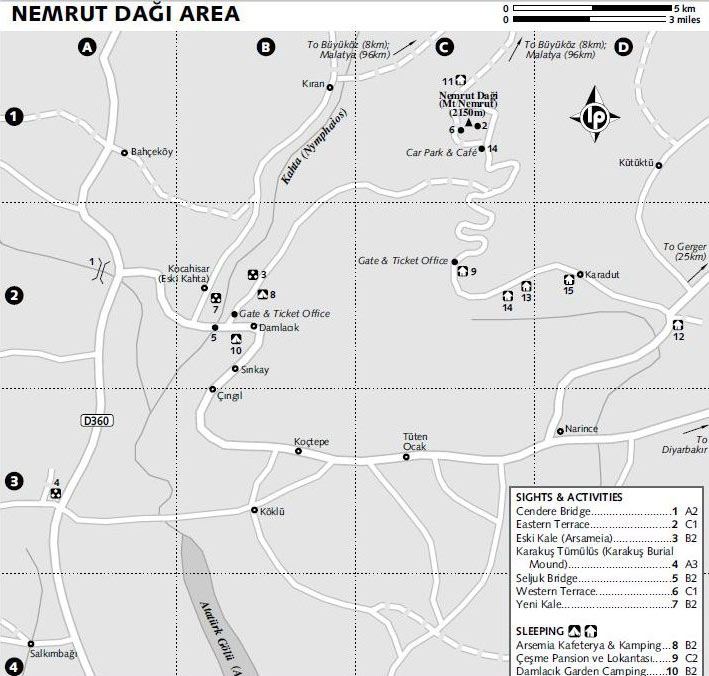 One more notice. One should not confuse this amazing sightseeing place with the same Nemrut Dag volcano Nemrut, which is also located in modern Turkey near Lake Van. This is completely different mountain.

It is strongly suggested to everyone planning to visit Turkey, to plan their trip so that beyond seeing the majestic cities and countryside, to bear in mind that there is the Mountain of Gods – Nemrut Dag, waiting for them as well.