The second name of this famous city Troy was Ilion. The major reason for acquiring thus famous among the other cities during ancient period was the myths of the Trojan War and the events described in Homer Poem “Iliad”. In the latter was described 10-year long wars, by coalition of Achaean kings, led by Agamemnon,king of Mycenae, which ended with the fall of the city-fortress Troy. People living in the city of Troy, were called Teucer by the ancient Greek sources.

Troy (Ilion) is considered to be the main city in northwest of Asia Minor. For centuries, the reality of Troy has been questioned, thus it existed as a city of legend. But there are always people looking for events in “The Iliad” as a reflection of real history. However, serious attempts to find the ancient city have been made only in the XIX century. The city was re-opened in the 70s of the XIX century by Heinrich Schliemann. Before him it was believed that the ruins of Troy were to be found under Bunarbashi village in Turkey, but Schliemann proved that Troy was located on a hill Hissarlik. 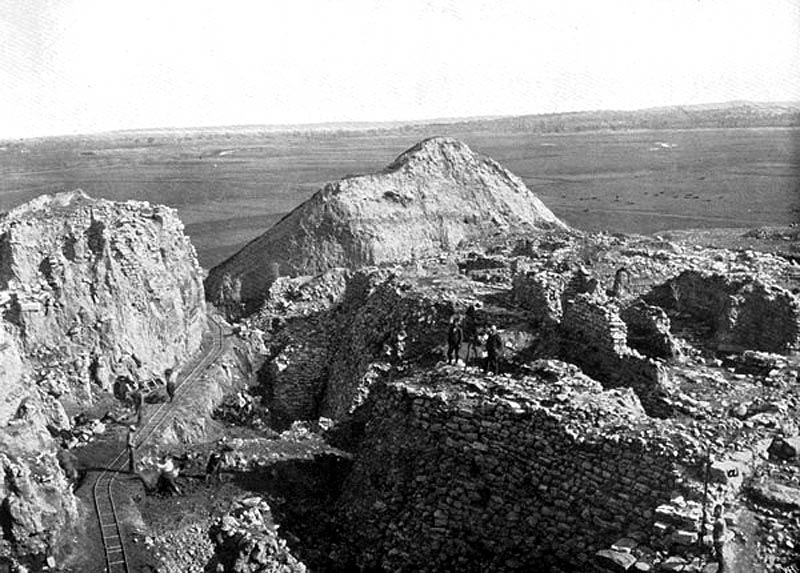 The myth about founding the city goes like this: according to the instructions of the oracle, the Phrygian king gave Ill colorful cow and said that he founded the city where the cow lies to rest. This happened on a hill, which was formerly called Ata, in honor of the goddess of madness Ata, overthrown by Zeus from Olympus. Ill-founded the city, and Zeus gave him a sign that Ill did the right to do. Thus was born the legend of Troy.

During excavations on the hill of Hissarlik Heinrich Schliemann discovered the ruins of the nine cities that lie one above the other. Troy in his opinion was in between the second and third layers. This theory was confirmed later. Schliemann also discovered a big amount of treasure, belonging of which he attributed to King Priam, however, later it was proved that the treasure had been buried long before the Trojan war itself.

According to Greek legend, the Trojan War broke out because of the fact that one of the 50 sons of King Priam – Paris, stole the beautiful Helen – the wife of Spartan King Menelaus. On the hot print, the Greeks sent troops just to take Elena back. However, according to some historians, it is likely just the tip of the conflict, which was the last straw and gave the background to start a war. Prior to that, presumably, there were lots of trade road conflicts between the Greeks and the Trojans, who controlled trades on the coast near the Dardanelles Strait.

It is important to mention that the war lasted for 10 years. Such persistence was encouraged with the support brought though the other lands. According to available sources, the army of Agamemnon encamped before the city from the sea-side, and didn’t siege a fortress on all sides. This could have been caused of the strategically handful location of the city, which didn’t allow the enemy to cut all the roads from outside. So or not, King Priamtook advantage of the situation and established close ties with Karya, Lydia and other countries of Asia Minor. That’s exactly where he got his assistance from during the whole war period. 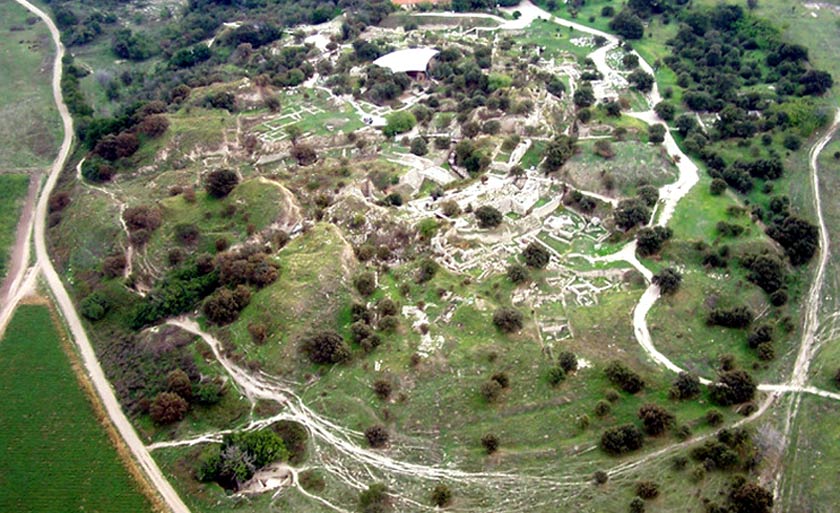 There are quite few episodes of the war, which have not found its archaeological and historical confirmation in reality. Saying it clear, in the Poem ‘Iliad”, one can’t find a word about the famous Trojan horse, but it is described in details by the Homer in his “Odyssey.” Furthermore, this is not the only source. All the events associated with the Trojan horse were also described by the Roman poet Virgil in the “Aeneid”, 1. BC, i. e. almost 1,200 years later after the case. Some historians suggest that a Trojan horse was understood as a weapon, such as a battering ram. Others argue that Homer named “horse” after the Greek ships. It is possible that the horse didn’t exist at all, and Homer used it in his poem as a symbol of the death of unsuspecting Trojans.

However, keeping track to the legend, Trojan horse appeared in town thanks to a clever ploy of the Greeks. The Greeks spread the rumor that there was a prophecy that if the wooden horse would stand within the walls of Troy, it will forever protect the city from the Greek invasion. Most residents were inclined to believe that the horse must enter the city. However, there were opponents of this idea also. Priest Laocoön offered to burn a horse or throw him off the cliff. He even threw in a horse with a spear, and all around heard that the horse was hollow inside. Soon Greek named Sinon was captured, who told Priam, that Greeks built the horse in honor of the goddess Athena, to redeem a perennial bloodshed. This was followed by the tragic events: during the sacrifice of the god of the sea Poseidon, the water floated two huge snakes that strangled the priest and his sons. Witnessing this, Trojans believed in the magic power of the horse and ordered to roll itinto the city. 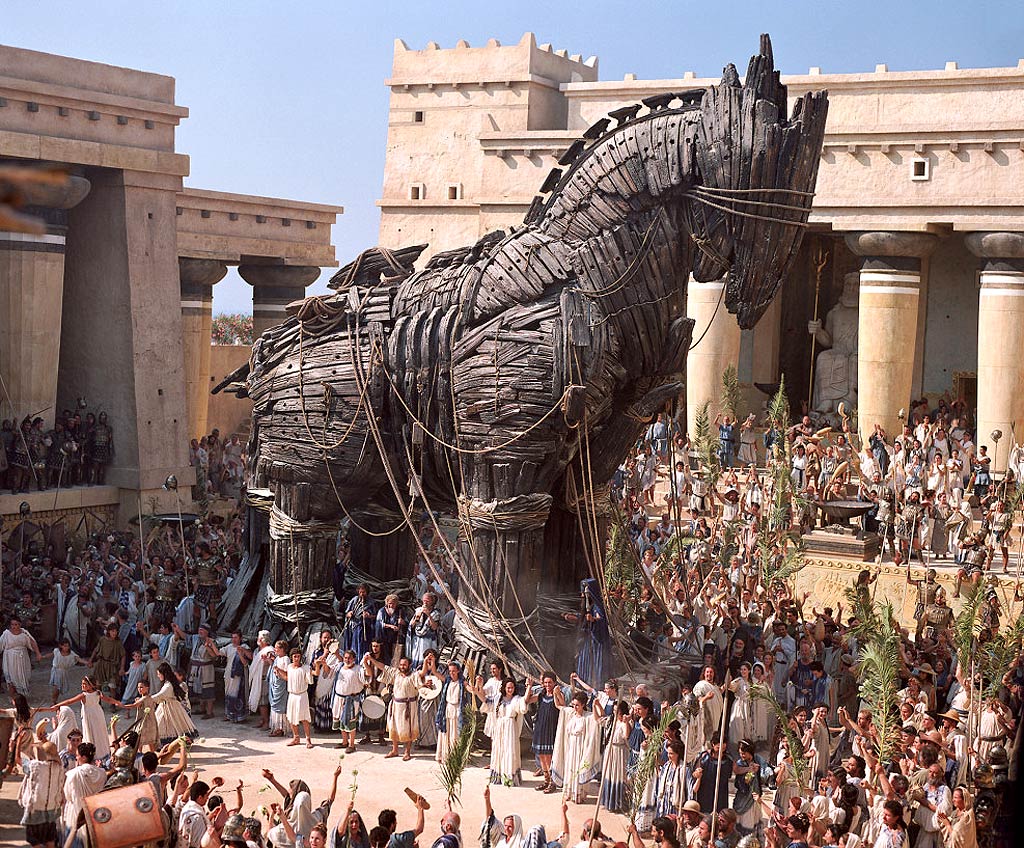 As a result Trojan horse was exactly the cause of the fall of city. According to legend, the night after the horse was in the city, Sinon let out of his belly hiding inside the soldiers who killed the guard and quickly opened the city gates. Being asleep after riotous celebrations in the city, even a very strong resistance didn’t help them. Several Trojan warriors, led by Aeneas tried to save the palace and the king. According to ancient Greek mythology, the palace fell by giant Neoptolemus, son of Achilles, who broke the front door with his ax and killed King Priam. 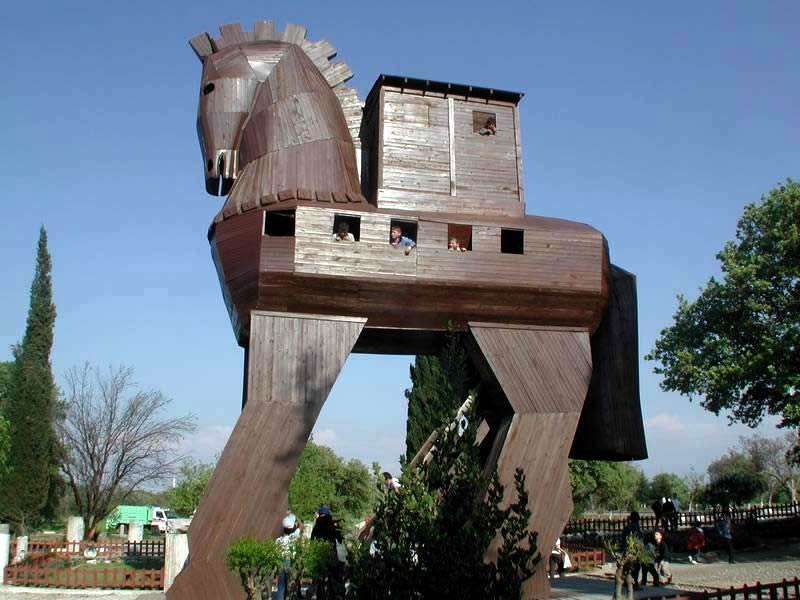 How much of all above-mentioned is true is still up to the reader to discover itself. One is true, that to the south of the Dardanelles, the ancient Gelesponta, lie the ruins of this legendary city. These ruins are attracted by travelers, as the very names of Troy and the Trojan War conjure epic heroes of Homer, from which counts the history of European literature. From antiquity until today survived not so much, but the stones are definitely worthwhile to see.

← Nemrut Dag – The Mountain of the gods
Eldorado →