The gardens of the Villa d’Este had a profound influence on the development of garden design throughout Europe. They are among the earliest and finest of the giardinidellemeraviglie and symbolize the flowering of Renaissance culture. Its innovative design along with the architectural components in the garden (fountains, ornamental basins, etc.) makes this a unique example of an Italian 16th-century garden. 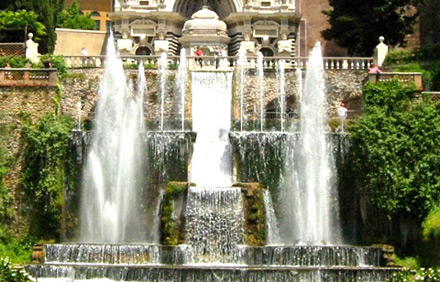 Villa d’Este, masterpiece of the Italian Garden, is included in the UNESCO world heritage list. With its impressive concentration of fountains, nymphs, grottoes, plays of water, and music, it constitutes a much-copied model for European gardens in the mannerist and baroque styles. 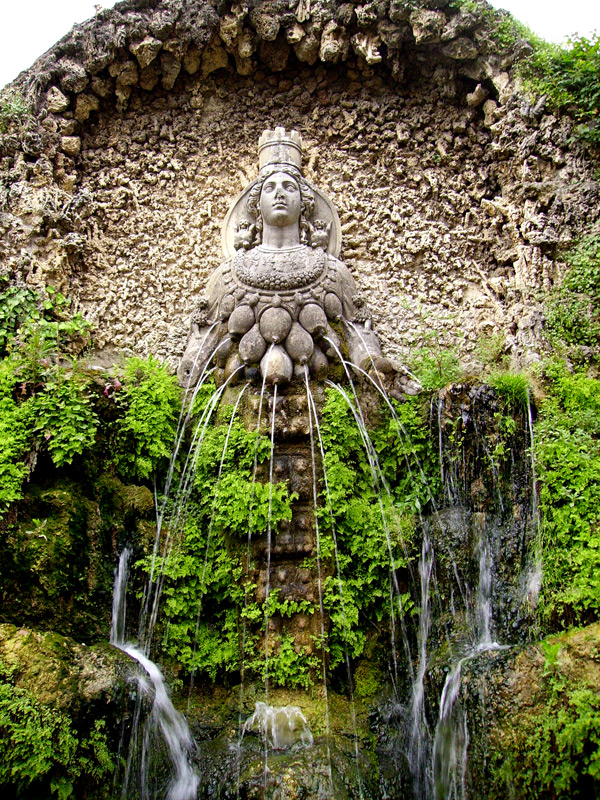 The story along which this amazing garden has been built goes like this: Cardinal Ippolito II d’Este after the disappointment of a failed bid for the papacy, brought back to life here the splendor of the courts of Ferrara, Rome and Fontainebleau and revived the magnificence of Villa Adriana. On September 9, 1550 he arrived in Tivoli, while being assigned to the post of city governor. By the time Cardinal arrived to his official residence, it was part of the Santa Maria Maggiore church, which he found extremely unattractive for him. He therefore decided to build a splendid villa with gardens, the design of which is traditionally attributed to PirroLigorio. (1500-1583)

The Villa d’Este garden stretches over two steep slopes, descending from the palace down to a flat terrace in the manner of an amphitheater. Five main transversal axes become the central axis from the fixed point of view created by the villa, as each of these axes terminates in one of the main garden fountains. Mainly spectator would have been amazed how the water organ worked and how the side stairs were arranged. Composition of the water supply was inspired by examples from antique, namely – interaction between water and air. Further, the side stairs edged by two stepped parapets crowned with basins pouring out gushes of water. Beyond the transversal path of the Dragons, the central stairway was divided into oval flights around the Fontana deiDraghi.However, the most striking effect was produced by the big cascade flowing out of a krater perched in the middle of the exedra. Jets of water were activated whenever unsuspecting people walked under the arcades.

Nowadays the garden is generally considered within the larger context of Tivoli itself. The landscape, the art and history include such important ruins as Villa Adriana, zone rich in caves and waterfalls displaying the unending battle between water and stone. Quite immanent links were often made with one of the wonders of the ancient world, to be precise, the hanging gardens of Babylon inasmuch the imposed construction of terraces would explicitly bring to mind thoughts about the other.
[ADS2]
A lot of programs for maintaining, repairing and restoring the waterworks, layout of the garden and fountain decorations have been carried out since 1660s. Thus, in XVIIIth century, existing situation, reflected in lack of maintenance let to the decay of the complex, which was aggravated by the property’s passage to the House of Hapsburg.The garden was slowly abandoned, the water works– no longer used–fell into ruin, and the collection of ancient statues— enlarged under Cardinal Ippolito, was disassembled and scattered.

This state of decay continued without interruption until the middle of the XIXth century, when Gustav von Hohelohe, who obtained in the villa from the Dukes of Modena in 1851, launched a series of works to pull the complex back from its state of ruin. Between 1867 and 1882 the Villa once again became a cultural point of reference, with the Cardinal frequently hosting the musician Franz Liszt (1811 – 1886), who composed Giochid’acqua a Villa d’Este for piano while a guest here, and who in 1879 gave one of his final concerts.
[ADS2]
At the outbreak of the First World War the villa became a property of the Italian State, and during the 1920s it was restored and opened to the public. Another, radical restoration was carried out immediately after the Second World War to repair the damage caused by the bombing of 1944. Due to particularly unfavorable environmental conditions, the restorations have continued practically without interruption during the past twenty years. 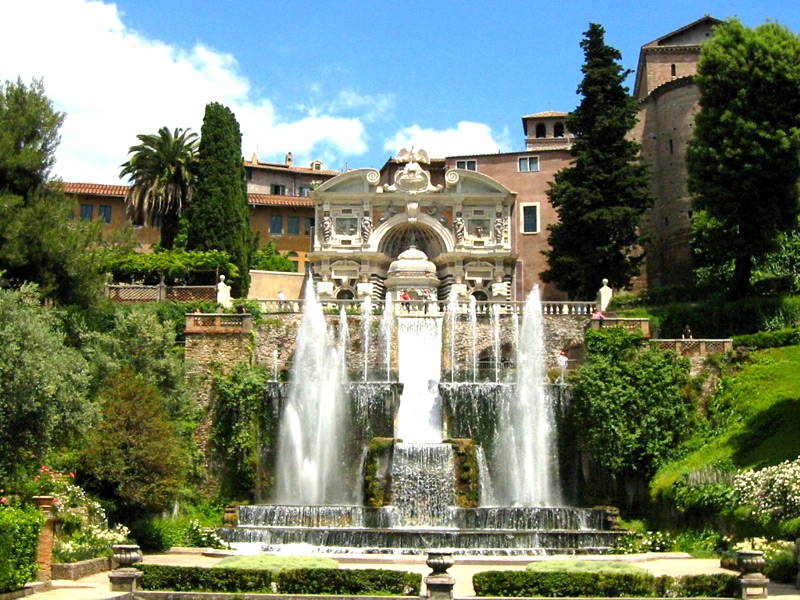 Finally, we could conclude that the garden of Villa d’Este maybe isn’t one of the most well-known and often-visited place in Italy, but the impressions and memories of those who had an honor to witness the pure man-made wonderland are irresistible and alluring for tourists who are still in search of such anonymous places within Italy.