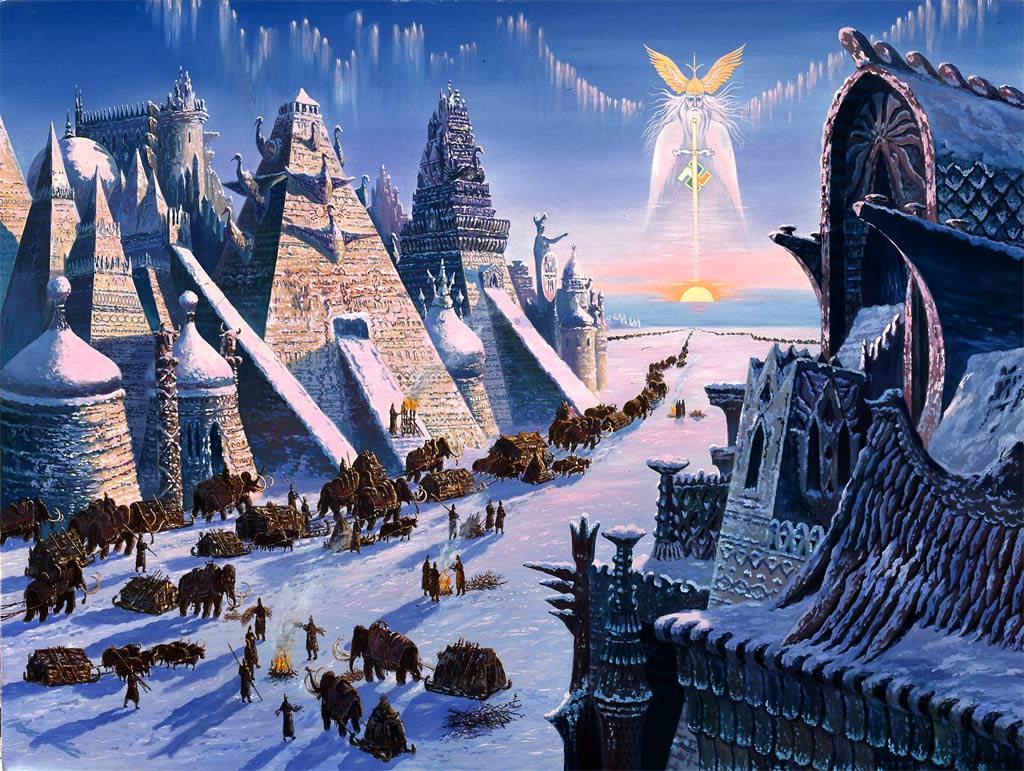 Sunken civilization of Atlantis was discovered by great Plato. Speaking frankly, he has created a brand and brought unfading glory to this ancient continent. Lemuria was considerably less fortunate.There were not much weighty words spoken in defense of her. However, there exists a witness who affirms unequivocally that Lemuria was not fiction! And this witness is not a person but Easter Island itself.

Easter Island is located in the South of Pacific Ocean, between Tahiti and Chile. It is triangular in the shape and in every corner of it piles extinct volcanoes. The island is approximately 170 square miles. It got its name from the Dutch explorer Jacob Roggeveen, when he arrived here on Easter Sunday, in 1722.

The island is located in the most remote areas of land in the world. Thus, the distance from the nearest continent, which is South America, is 3703 km. To the next nearest island is 2092 km. Above all, what the Easter Island is famous for are Moai statues. This statues amount to 887 and erected at different times and époques, but from the hand of the same civilization – Lemurians.

Lemuria, according to the legends and even esoteric research, went to the bottom of the ocean as a result of a terrible global catastrophe, which destroyed everything, including, Atlantis. Flooding dragged on for years, thus, it was not a surprise. Atlantic race, trying to survive from the advancing water, wandered from island to island until only one piece of land did not remain uncovered as a highest point. It was Lemuria – now Easter Island. 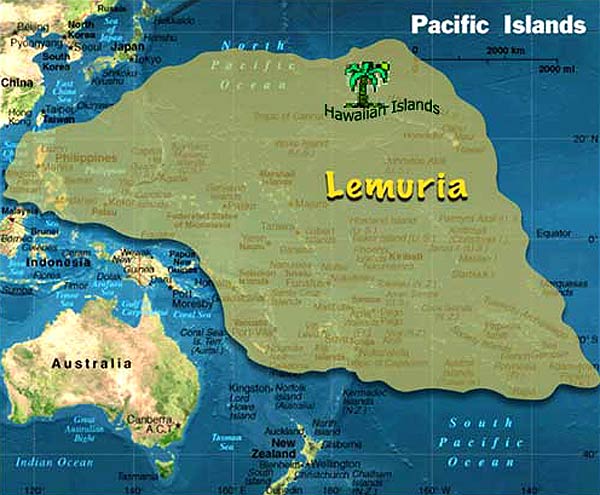 However, even this island was not always remaining above the surface of the oceans. It went to the bottom as everything else, as indicated by sedimentary rocks on the slopes of the volcano RanoRakaku and ten-meter high Moai. These stone statues were covered more than half by the sediments, and today they are shown from the ground only a third of its real size.

It is interesting to note that, Admiral Roggeveen who arrived on the island in 1722 was greeted by the natives, who had a different skin color – black, red and bright. This matter is enough to conclude that once so remote island was populated as a result of “emergency evacuation.” Could be because of the skin color, or the passed stress, the natives were very hostile, both to the travelers, and even, in relation to each other. It was very common among them to catch stranger and then eat him/her.

Roggeveen also noticed to the natives such features as a pendulous earlobe. It was a tribute from the forefathers of Lemurians, who, according to legend, had a so-called spiritual hearing. The sound of a blossoming flower and even change of their color, cosmic vibrations and legendary “music of the spheres” – all were audible to Lemurians. Therefore, this talent brought them pleasure, which unfortunately is not available to modern coarse man anymore.

Saying couple words about this giant Moais: The largest of them had a height of 21.6 meters and weighs of approximately 165 tons. Pedestals, called ahuwere designed for many of the statues. There were more than three hundred of these pedestals. Each of them has an incredible structure, built of the huge blocks of stone. No additional means were used for fastening the units. They were fitted to each other with the utmost precision, which is possible only with the use of the fantastic effort. So far, despite of the continuing effort of timeline, even knife blade cannot be inserted between the blocks.

According to legend, the largest Ahu and Moai were created for the children from mixed marriages between the Lemurians and the Atlanteans. The first such construction had a height of 18-meter, and the second was half athight. As a result of the ancient settlers on Easter Island the average height of Moias decreased to 10 meters. It has to be mentioned that constructing such statues was quite feasible business to the locals. 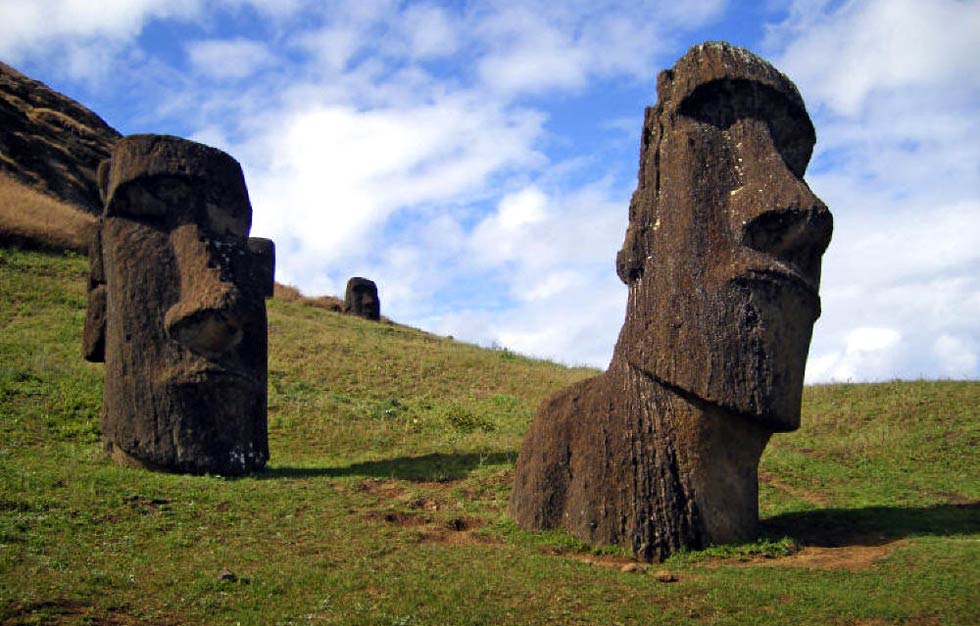 Perpetuate themselves in full growth remained in the tradition of the islanders as long as the culture of the race itself. Again, still the disappearance of the giants didn’t enlightened suddenly. Their disappearance was gradual, under remorseless action of collapse. Aside to the decrease of growth, decreased even an ability to hear the music of spheres, and the addiction to high spirituality.

That is why all the subsequent 10-meter Moaidiffer themselves from the smaller size ones and change in its typical face. If the first islanders had narrow face with sophisticated, “aristocratic” features, their descendants, have become degenerates chubby. This process was observed in the case of statues. After all, every new generation was created with different characteristics. The most recent Moai height did not exceed 4 meters, and their faces were already wide, without noble “traits”.

Apart from the ancient giants, captured in the statues of Easter Island, the existence of this civilization is also described in the sacred books of the Hindus. According to what the books depict, it is almost same to the first images of Buddha and many venerable characters from Buddhist and Hindu tales. The technology of fitting blocks for ahu is similar to the ones used in the construction of walls Saksauamana near the Chilean city of Cusco and the Temple of Tia-Huanako in Peru. Moreover, both refer to the existence of ancient civilization, which lived on a single continent.

Serious exploration of Lemuria by the scientific world can be said that has not started yet. To come to the point of making first steps in this direction will need a huge sacrifice from the science. However, if scientists found enough courage, then one would maybe witness a startling discovery. For example, nowadays, some of the science enthusiasts have a reason to believe that in 56 km from Easter Island lies underwater grand Lemurian city. Only thing what is needed is to venture out and start looking for it.