St. Peter’s Basilica is a huge temple, built over the tomb of the saint Peter, who died for his faith. In the construction of the church almost all well-known Italian architects of the XVI century participated. Dimensions of the church are shocking, but the dramatic story of its construction is no less remarkable. 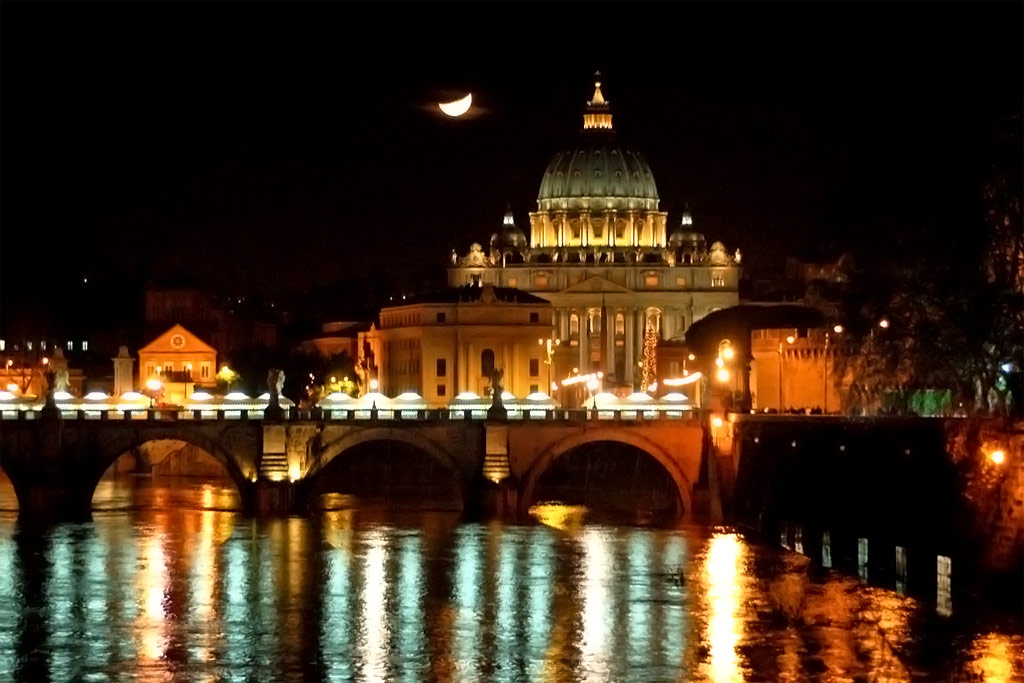 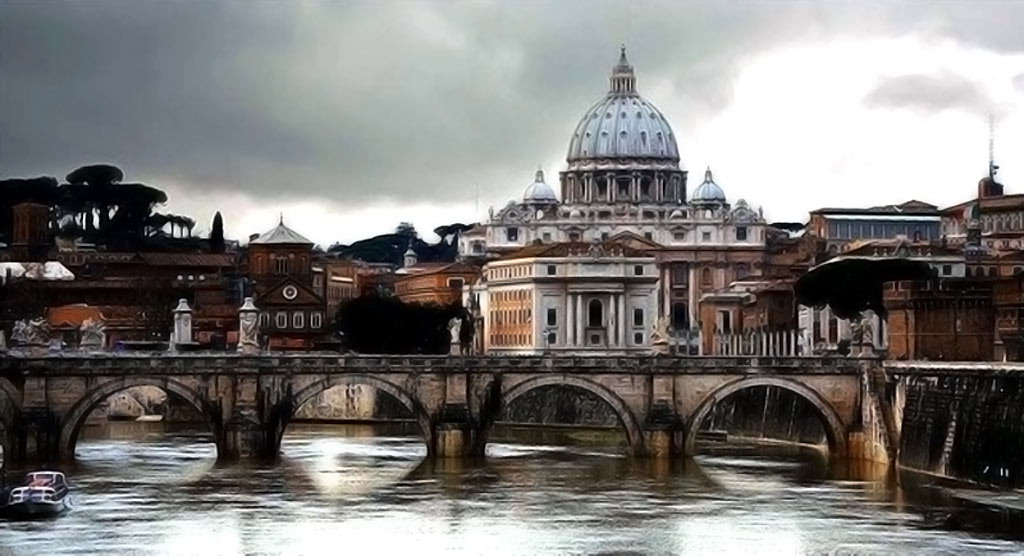 St. Peter Basilica is located in the territory of the sovereign state of the Vatican. It often is regarded as one of the holiest Catholic sites, “holding a unique position in the Christian world” and “the greatest of all churches of Christendom.”

In the 1st century AD, the site of St. Peter’s Basilica hosted the Circus of Nero and a cemetery. According to ancient tradition, St. Peter was martyred in the Circus and buried nearby. This happened in 64 A.D. His simple grave was remembered and visited by the faithful, and in 324, Emperor Constantine began construction on a great basilica over the tomb. The shrine of St. Peter is still the central focus of the church today. 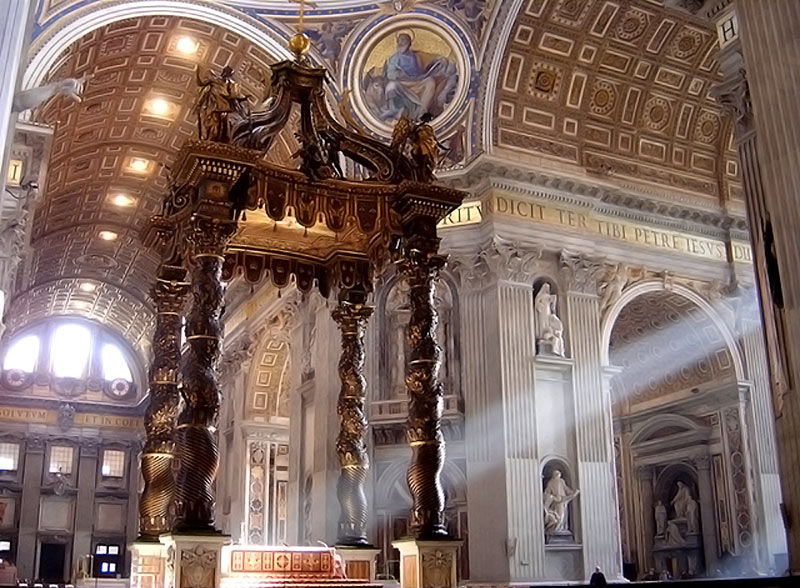 The building itself is truly impressive. Being one of the largest churches in the world, it has a 218 meter long nave. The basilica’s dome is the world’s largest measuring 42m in diameter and reaching 138 meter high (more than 450ft). The interior, which includes 45 altars, was decorated by many famous artists. Some of the most important works in the church are the Pietà by Michelangelo, the papal altar by Bernini, the Throne of St. Peter – also by Bernini – and the Monument to the Stuarts by Canova. The opulent interior can be visited daily for free although a strict dress code is enforced. 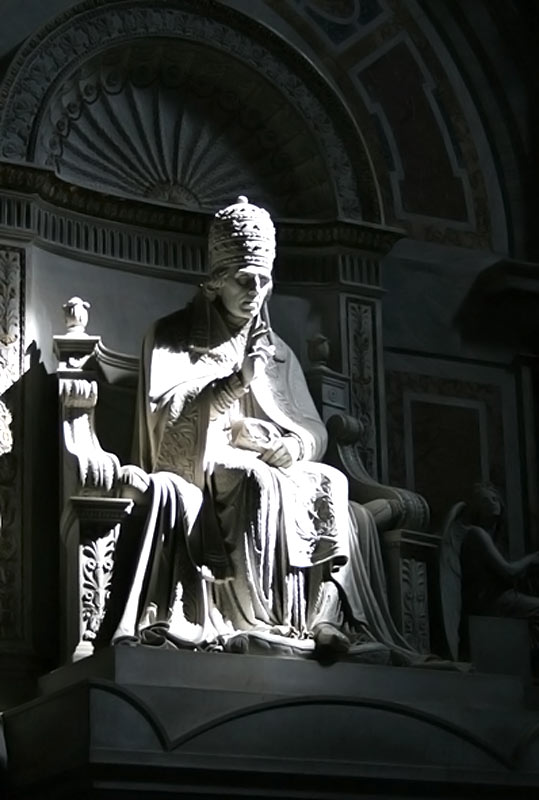 However, it should be noted, that the St. Peter’s Basilica was not built with the same extension at the beginning. In 1452, Pope Nicholas V ordered the construction of a grand new cathedral. Almost nothing is left from the old building, except the relics, forged gates, drifted to the new cathedral sculptures and mosaics of the individual fragments. After the death of Nicholas V in 1455 the construction work was suspended. Since then, contractors and architects continually succeeded each other, so the completion of the temple lasted for about 170 years.[ADS2]Pope Julius II planned far more for St Peter’s than Nicholas V’s program of repair or modification. Julius was at that time planning his own tomb, which was to be designed and adorned with sculpture by Michelangelo and placed within St Peter’s. Firstly, Julius II appointed Donato Bramante as the chief architect of the new Basilica. In 1547 Michelangelo succeeded Bramante. He designed the imposing dome and altered some of the original plans. Michelangelo died in 1624, two years before the St. Peter’s basilica was dedicated by pope Urban VIII. Ever since, this church has been the center of Christianity, drawing pilgrims from all over the world. 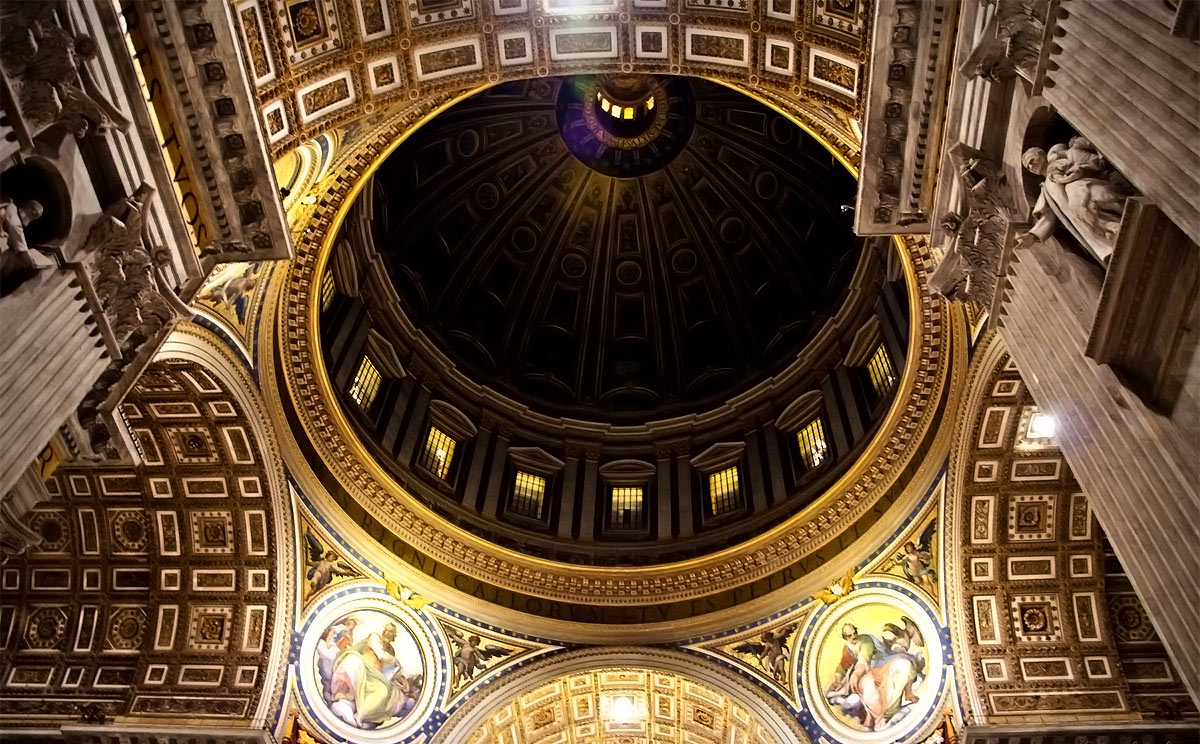 The dome of the church always attracts the most significant attention and that’s where Michelangelo’s contribution is mainly resembled. Master criticized all his predecessors, and returned to the original plan of Bramante – only slightly modified and corrected dome pillars underneath. However, the version of Michelangelo remained little after time: intact preserved only the outer part of the apse. Finally, a facade with a portico added onto in the early XVII century, Carlo Maderno, completed the cathedral square. 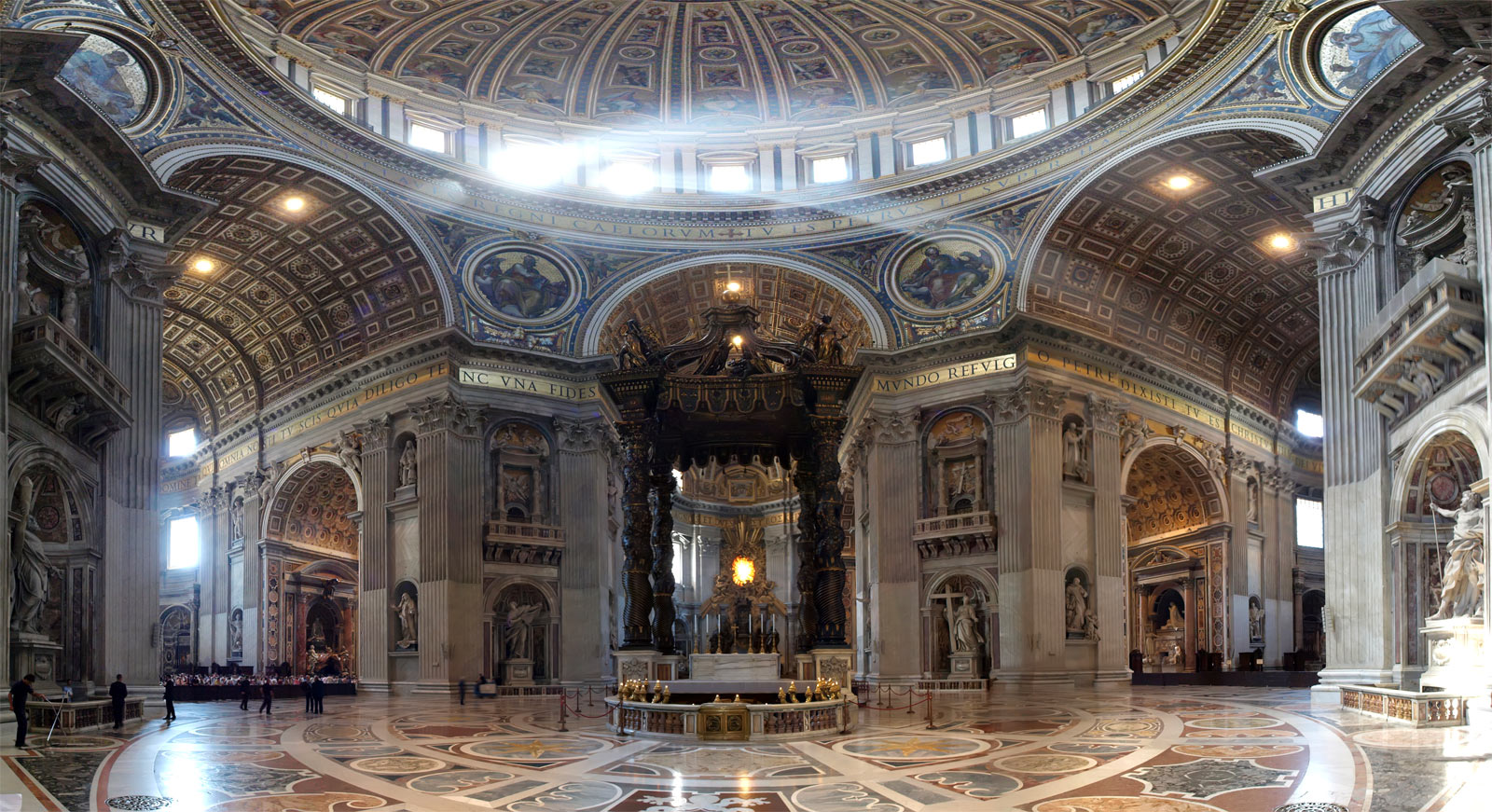 Nowadays, the inner surface of the dome is decorated with images of four Evangelists: Matthew – an angel, Mark depicts a lion, Luke – with the ox, and John – with an eagle. Lion, an ox and an eagle are the animals, about which John the Evangelist writes in the “Apocalypse”, emphasizing that that these animals are around the throne of God.

It is obvious that St. Peter’s became the symbol of the power of the Catholic Church. But it has also become a model, and whose features are recognizable in all the major buildings of the most of the Christian countries temples within the following centuries. It still stands stunning in front of the visitor’s eye.