Japan is an amazing country. It is often described as the purest, the most hospitable in the world, being closest to the edge of island. 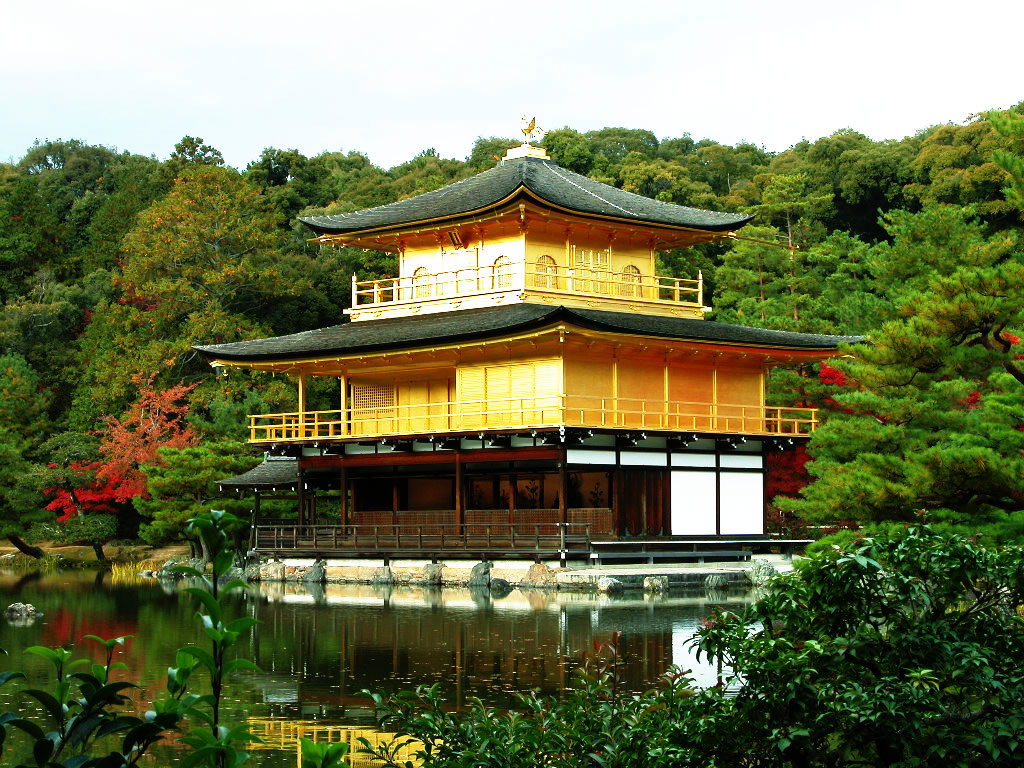 There are thousands of fascinating and comfortable tourist routes in different parts of the country. But! Experience the true flavor of Japanese history, the unique Japanese tradition, culture, art, religion, architecture, craft and better and best of all possible only in Kyoto.

Kyoto is the ancient capital of Japan (for over 1000 years). It simply is the city-museum under the open sky. It is amazing that 1,600 Buddhist temples and 600 shrines have survived in this land; 17 monuments of history and culture of Kyoto are on the list of World Cultural Heritage Site by UNESCO. As long as Kyoto was the country’s capital and seat of the Japanese Emperor, court aristocracy, the city has long been and is even now the focus of talents: famous artists, poets, writers, and people of other professions. Furthermore, this city is considered to be the epitome of Japanese culture.

Japanese people are probably very proud of having something like Ryoanji Temple, which is the breathtaking site of Japan’s most famous rock garden, which attracts hundreds of visitors every day. “Rock Garden”, “Philosopher’s Garden”, “Garden of Ryoanji”, it has been called dozens of other names during different periods of time. 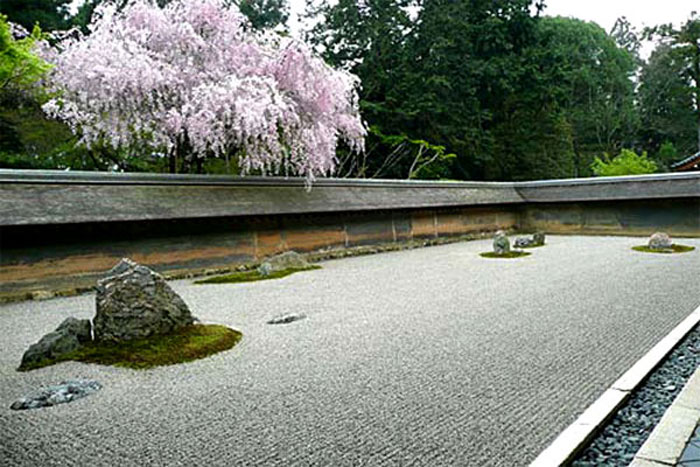 However, the fact that this garden is probably of the biggest value in the Japanese city of Kyoto, is proved by the circumstance, that there still goes talks about the interpretation of it’s essence.The garden’s date of construction is unknown and there are a number of speculations regarding its design. The garden consists of a rectangular plot of pebbles surrounded by low earthen walls, with 15 rocks laid out in small groups on patches of moss. An interesting feature of the garden’s design is that from any vantage point at least one of the rocks is always hidden from the viewer.In December 1994, this temple was designated as World Heritage by UNESCO.

Kinkakuji Temple or Golden Pavilion is the main calling card of Kyoto. 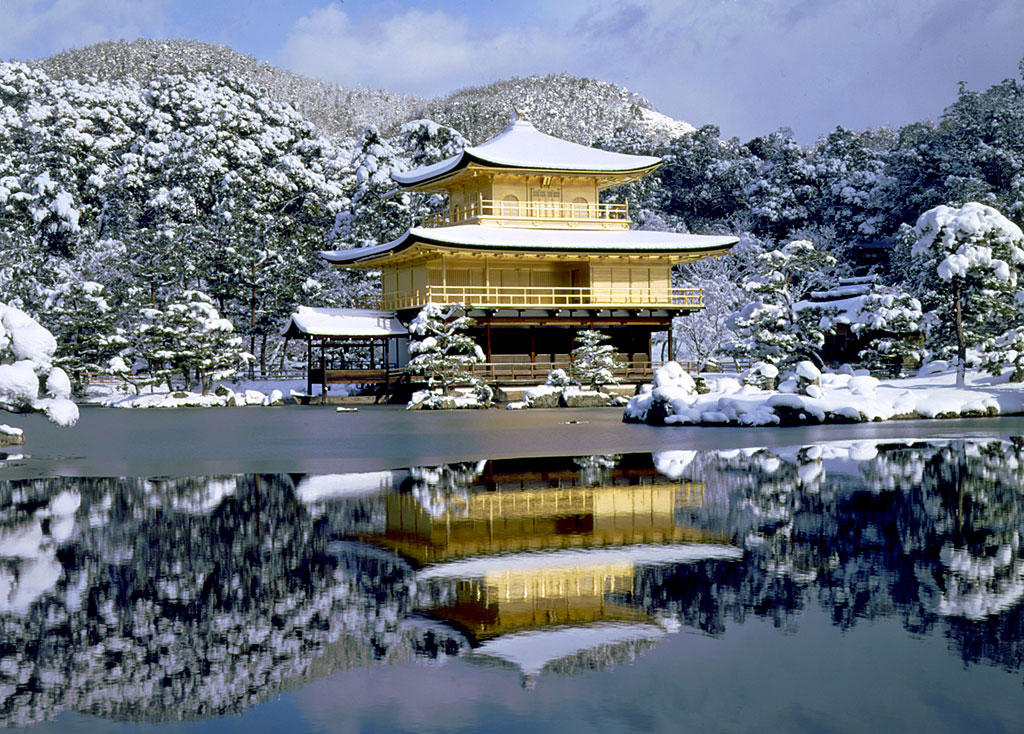 Covered in gold leaf and bright shining in the blue sky on a sunny day, it seems to admire everyone, looking at their own reflection in the mirrored surface of the lake, which is itself located in the middle. In autumn its golden glitter becomes almost red – because of the maple groves surrounding the pavilion. Kinkaku-ji was formally called Shariden. The elegant, harmonious building consists of three types of architecture. The 1st floor is Shinden-zukuri, the palace style. It is named Ho-sui-in.[ADS2]The 2nd floor is Buke-zukuri, the style of the samurai house and is called Cho-on-do. The 3rd floor is Karayo style or Zen temple style. It is called Kukkyo-cho.It should be mentioned that there are other points of interest in the surrounding places. The name of such the pond is Kyoko-chi (Mirror pond). 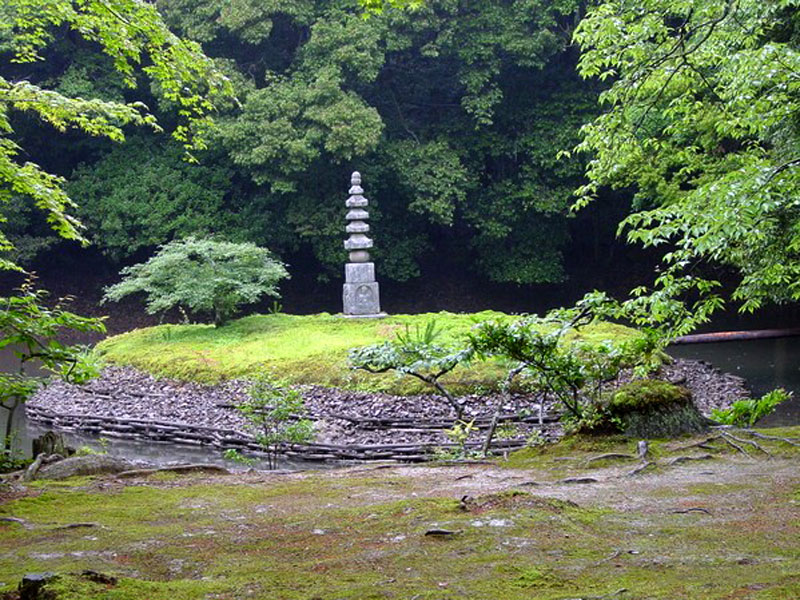 The pond contains many large and small islands. Climbing a few steps, you stand at the edge of another small pond, An-min-taku. The small stone pagoda on the island is called Hakuja-no-tsuka (the mound in memory of the white snake).

Gion is a district of Kyoto, Japan, originally developed in the Middle Ages, in front of Yasaka Shrine. It has marrow streets with darkened wooden walls of old houses, pierced by a delicate aroma of Japanese living past. It is especially nice to hear the sound of wooden sandals, on the stone floor, and suddenly see a glimpse of a figure in the distance, like a light cloud outline – it is a Maiko, a living work of art, a little picking with his left hand a long sleeve jacket with low-hanging belt and hiding the face heavily powdered a bamboo umbrella, a seed somewhere on business … Thus, saying short and sharp that was a district, built to accommodate the needs of travelers and visitors to the shrine. It eventually evolved to become one of the most exclusive and well-known geisha districts in all of Japan.

Eygamura (village cinema) is not just a village. This place has often become a film set for famous movies. Nowadays it became a recreational park for tourists. Here, one can find not only the recreated buildings and streets, but very fascinating interior of the houses. Go through the streets of actors: samurai swords suit street battles, shuffling girls in kimonos and parasols, walking around with a warrior stern faces. It is wonderful how one can buy absolutely exclusive items on the flea markets in Kyoto: ceramics, historical prints, interior, authentic kimonos, wicker, antiques, art and more.

Kyoto is Japan’s best place to admire the cherry blossoms (March-April) and autumn leaves (November).Plus It has a very convenient transportation scheme, which allows travelers for a stay in Kyoto with easy access to the most beautiful places in Japan (Lake Biwa, Ama-no Hasidate about. Miyajima, IseJingu, Osaka, Nara, Kobe, Mr. Nagoya, etc.).