10 interesting facts about the Great Pyramid of Giza

7 wonders of the world

Still lots of mysteries are surrounding the Great Pyramid of Giza which probably are never going to be revealed, but I think that it’s the shade of a mystery which makes the wonder even more magneting and admiring. Going through the notes and research works about the Pyramid I found some particularly interesting and catchy facts which are highlighted below: 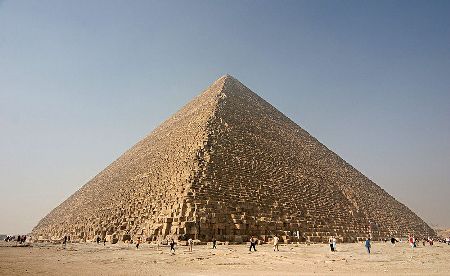 1. Let’s start with a little funny paradox, did you know that the owner of the largest pyramid of Giza is also known for having the smallest Egyptian royal sculpture ever discovered? The ivory statue of paraoh Khufu (AKA Cheops) found at Abydos is 7.5 cm (3 inch) high. 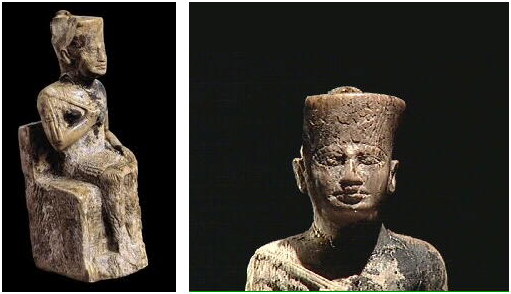 2. But you wouldn’t call Khufu a small guy in real life, in fact he is known as a big and cruel leader. As described by Herodotus: “Cheops moreover came, they said, to such a pitch of wickedness, that being in want of money he caused his own daughter to sit in the stews, and ordered her to obtain from those who came a certain amount of money (how much it was they did not tell me): and she not only obtained the sum appointed by her father, but also she formed a design for herself privately to leave behind her a memorial, and she requested each man who came in to give her one stone upon her building: and of these stones, they told me, the pyramid was built which stands in front of the great pyramid in the middle of the three, each side being one hundred and fifty feet in length.” 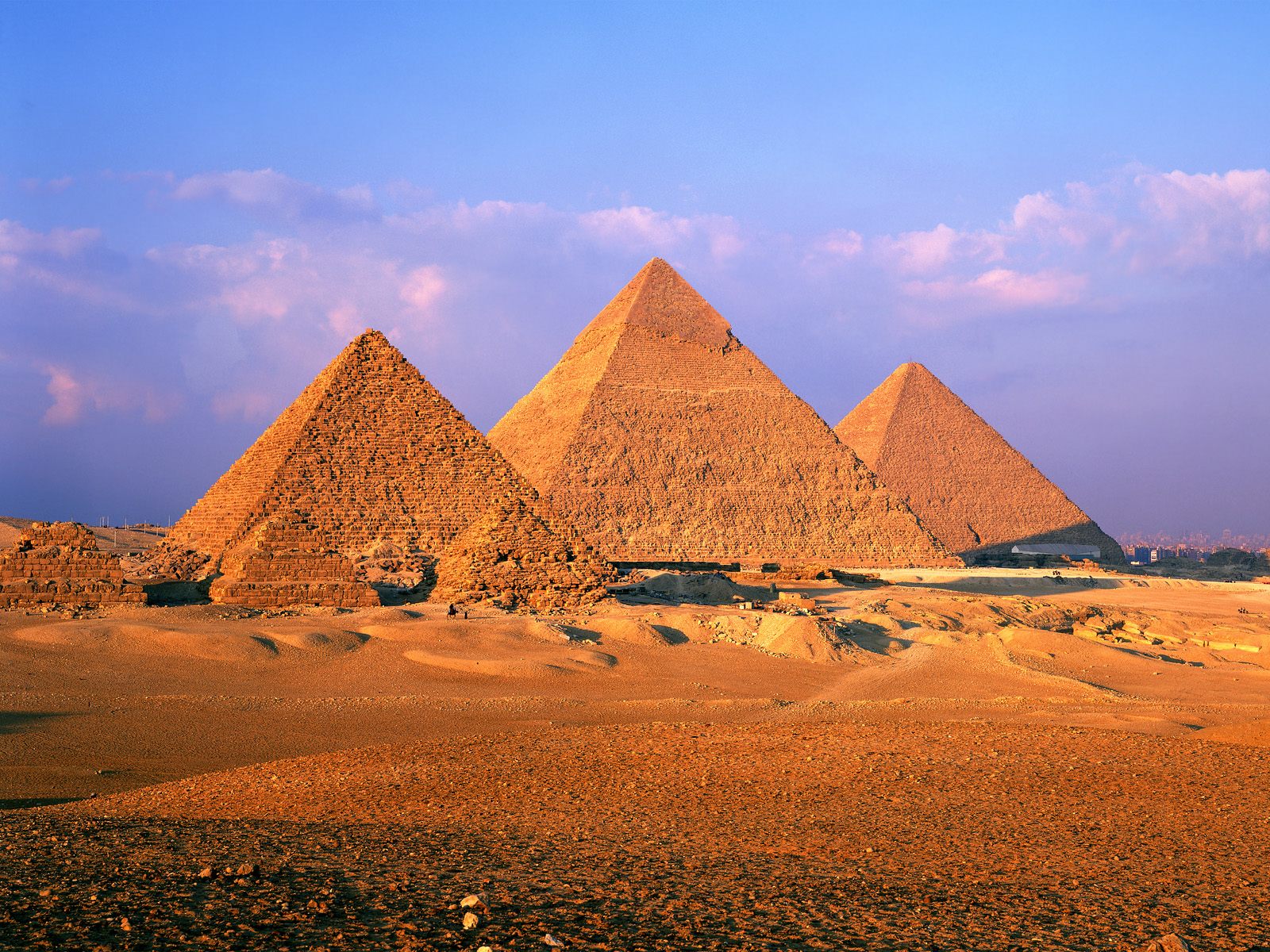 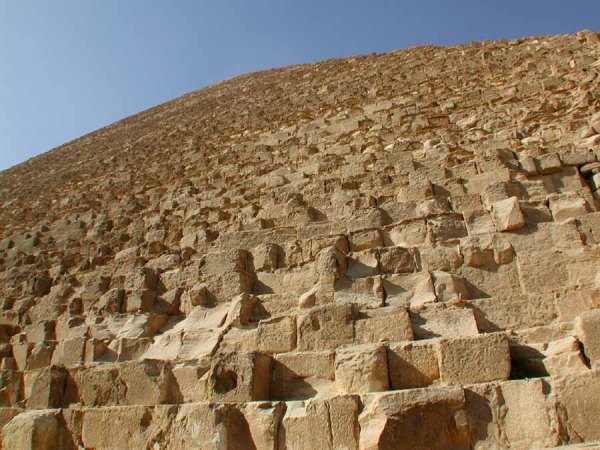 4. Some believe that Khufu’s pyramid at Giza was built by slaves, but modern Egyptologists accept that it was built by many tens of thousands of skilled workers rather than slaves. It is known that Khufu’s nephew Hemiunu was appointed head of construction for the Great Pyramid and that Khufu provided good food and clothing for his workers. According to Herodotus: “On the pyramid it is declared in Egyptian writing how much was spent on radishes and onions and leeks for the workmen, and if I rightly remember that which the interpreter said in reading to me this inscription, a sum of one thousand six hundred talents of silver was spent…” In the video below, you’ll find interesting information about the pyramid builders.

5. Experts have talked a lot about the methods by which stone blocks were raised into position, it is usually assumed that wooden and bronze levers were used to put the blocks into position. “This pyramid was made after the manner of steps which some called “rows” and others “bases”: and when they had first made it thus, they raised the remaining stones with machines made of short pieces of timber, raising them first from the ground to the first stage of the steps, and when the stone got up to this it was placed upon another machine standing on the first stage, and so from this it was drawn to the second upon another machine…” – describes Herodotus.

6. About 600 years ago, beautiful smooth blocks known as Casing Stones covered the entire exterior of the pyramid, encasing the whole structure, before the Arabs began to tear the stones off. The ancient writer, Strabo, said: “It seemed like a building let down from heaven, untouched by human hands.”  It has been calculated that the original pyramid with its casing stones would act like gigantic mirrors and reflect light so powerful that it would be visible from the moon as a shining star on earth. At the present, only a few of these are left in position on each side at the base.  One of the largest remaining Casing stones is nearly 5 feet high by 8 feet at the bottom, and weighs about 14 tons.

7. There are three known chambers inside the Great Pyramid – King’s chamber, Queen’s chamber and unfinished chamber. A team of French Egyptologists (Gilles Dormion and Jean-Yves Verd’hurt) claims that an undiscovered room lies underneath the pyramid’s Queen’s Chamber and insists that it is the actual burial chamber for Khufu and not the one known as the King’s chamber. However, even those who believe that the King’s chamber was never put to use believe that Khufu may have been buried elsewhere rather than in another, hidden chamber. Well, there are still lots of mysteries concerning Khufu’s burial to be.. or never to be revealed. 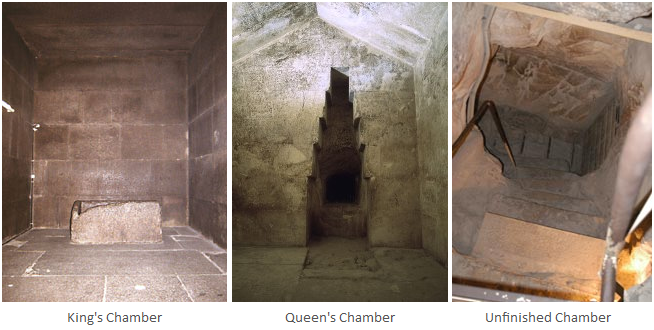 8. One of the most mysterious parts of the Great Pyramid is the empty coffer in the King’s Chamber, it is made from a solid block of chocolate-colored granite and is even harder than the granite walls of the King’s Chamber. For thousands of years, researchers have wondered about its purpose. Ancient legend says that it came from Atlantis or even from America.  It was never inscribed or decorated. Also, since it is too large to pass through the low passages leading into the King’s Chamber, it is considered to be placed in the chamber before the chamber was closed and passages were sealed. 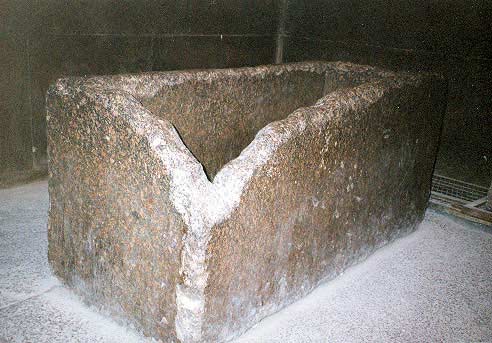 10. Another pleasant discovery in the Great Pyramid is a spectacular ancient cedar-wood boat, which was found sealed in a pit at the base of the Great pyramid. This boat was interred in pieces and has since been reassembled, restored and preserved in a climate controlled museum over the site of the original pit. The name “Djedefre”,  who was Khufu’s son and successor, is found on some of the slabs of stone that sealed the pit, indicating that probably the boat was put there by Khufu’s son. 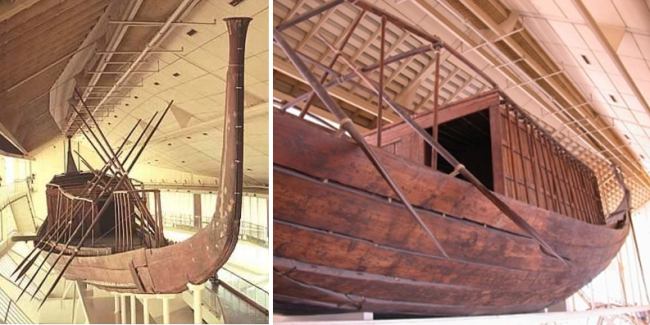 12 key facts and legends about the Hanging Gardens of Babylon →